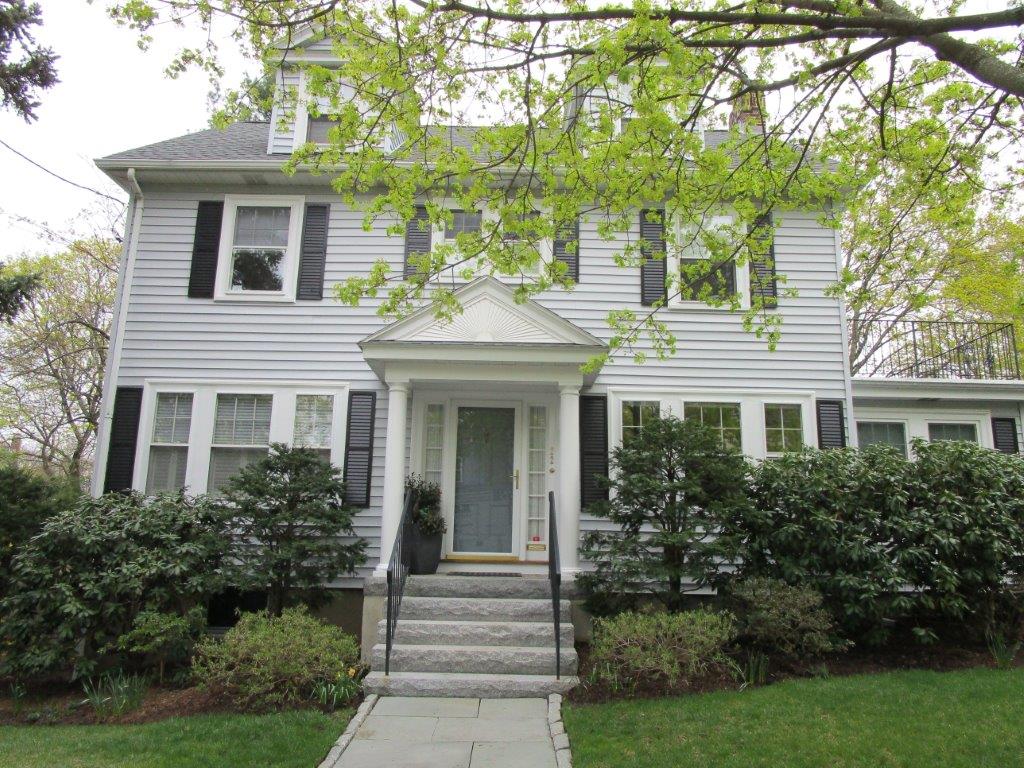 The owner of a colonial home in Belmont, MA already knew plenty about the benefits of a ductless heating and cooling, or mini-split, system. After all, he’d had one installed in his home for years. He used it primarily to supplement the natural gas radiator heat already in the house.

However, after 15 years it was time to start looking for a new one. As with any hvac equipment, eventually, even a mini-split like this wears out. For our homeowner, this was an opportunity to enhance his climate control.

Previously, he used this system in just two rooms of his house. After seeing the difference just those two units made, he was ready to expand.

To do so, he chose N.E.T.R., Inc.. He’d read our outstanding customer reviews online. And, he saw that we are the number-one Elite Diamond Dealer for Mitsubishi products in New England. After doing his research, our homeowner was confident we would get the job done right the first time.

And, he was right. Now, his colonial home has even better climate control than before. And, his energy bills have dropped even lower than with his first mini-split.

Solution: Installed new Mitsubishi units with additional zones in the kitchen and second-floor office and a new outdoor heat pump 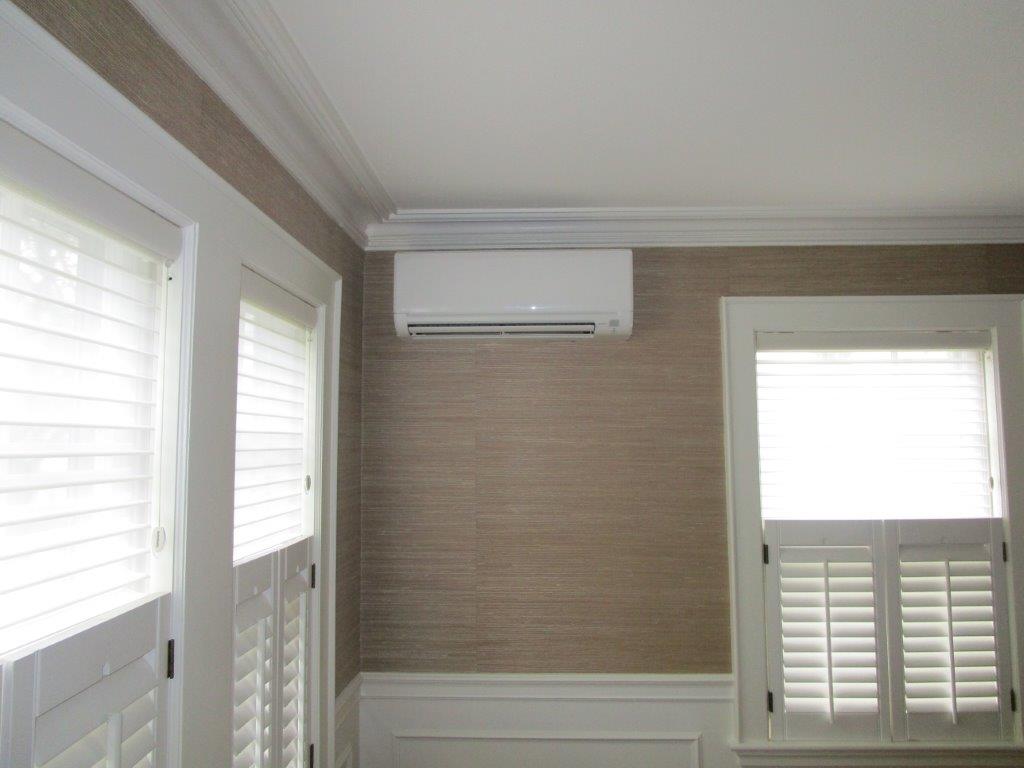 How ductless heating and cooling works

To understand the appeal of ductless heating and cooling, you need to know how it works. In some ways, it’s similar to a traditional furnace or central air conditioner. But, it doesn’t use ductwork and vents, or pipes and radiators.

Instead, treated air travels through narrow, flexible plastic tubing, or piping. The tubes are less than three inches wide. This makes it easy for our installers to place it virtually anywhere in the house.

The piping runs between rafters just like electric wires. We don’t need to rip out any walls or build out any sections along the ceiling to house bigger ductwork.

At the end of the piping is a unit, or air handler. This is the component that circulates the air in a home. It’s a white, rectangular unit that hangs high up on a wall.

On the other end is the outdoor heat pump. This is the unit that generates the cooled air or heat. It uses a heat exchange process to create climate control using relatively little electricity.

Installing these parts is simple and quick. Our techs set up the heat pump outside and drill a small hole for the tubing to fit through. Then, once they run that piping, they fasten it behind the HVAC unit where people can’t see it at all.

The system doesn’t take up much room and is barely noticeable. The units are near the ceiling and whisper-quiet. In all, it only takes a few hours. 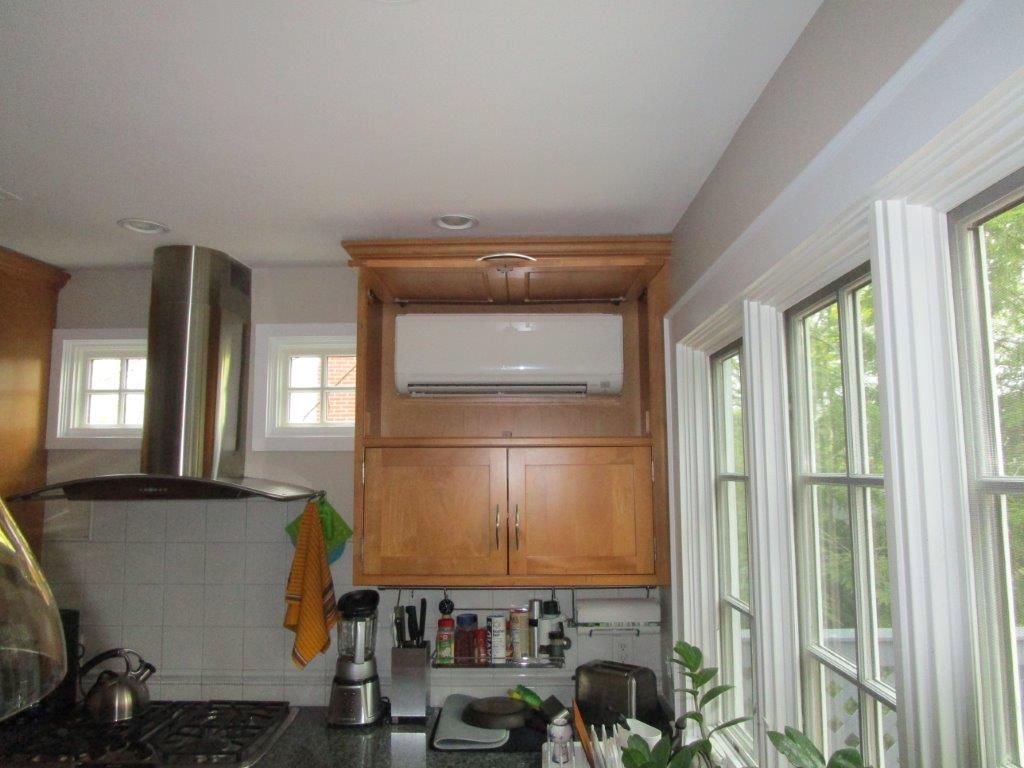 Ductless hvac in a colonial home

A mini-split has many benefits for a colonial home. Often, these are older houses with outdated heating and cooling solutions. As a result, it’s usually difficult to upgrade these without doing major work on the house.

In this case, the home has radiator heat. That means there are often hot and cold spots in the house. Heat from radiators enters a room slowly, leaving some areas colder than others. This becomes more noticeable when there isn’t proper air flow to circulate the air.

Also, you can’t add air conditioning to radiator heat. Adding on works with a furnace because the ac can use the same ducts. But, it doesn’t work with pipes.

For this colonial, in particular, common structural factors make climate control a challenge. First is the attic. Heat naturally rises, which means much of the warmth passes both floors and collects up there.

Then, it escapes easily. Attics are commonly not insulated well. The dormer windows here made that even more of a concern. Since heat is attracted to cold, the warm air keeps moving in the winter, leaving the house. 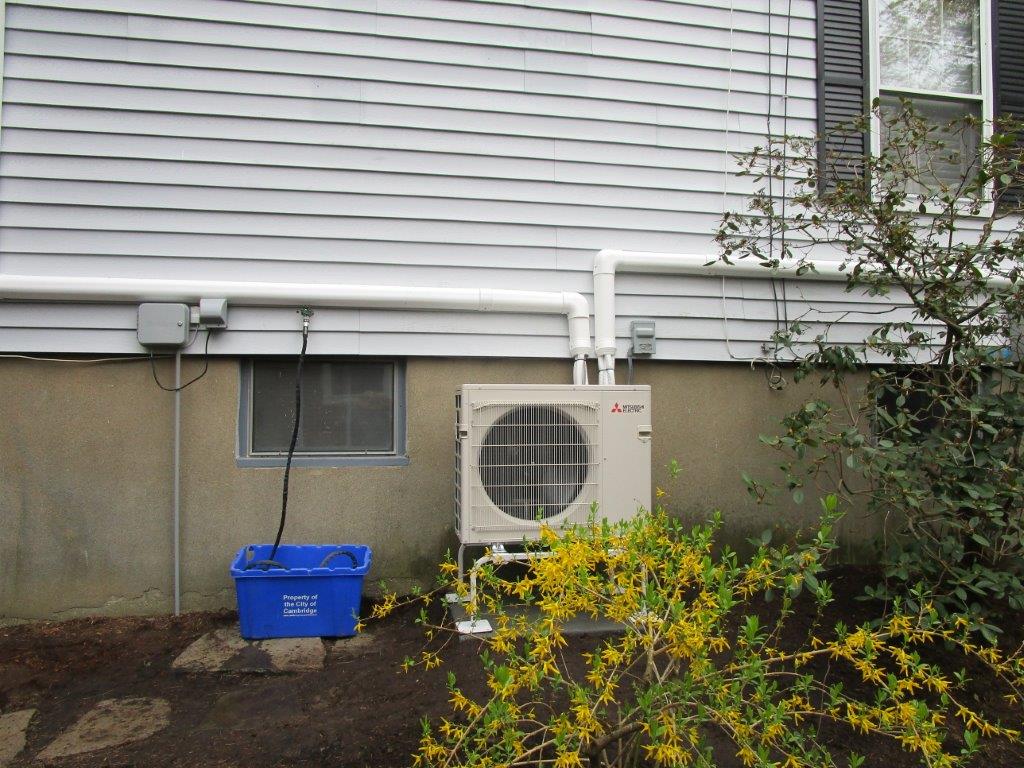 We’ve mentioned that our homeowner is adding units in rooms where he didn’t have them before. This is possible because a mini-split takes a zoned, versus central, approach to hvac. As a result, there’s more flexibility in how we can set them up.

Each air handler has a thermostat. Therefore, each one is set independently of the others. Think of this in contrast to a furnace. With central, there’s one thermostat controlling the entire house.

And, that thermostat is usually on the first floor, in the living room. Well, what happens when the bedrooms are colder than downstairs? Often, they remain cold.

That’s because the heat shuts off once the room with the thermostat reaches the desired temperature. It doesn’t account for other areas.

Some radiator systems avoid this problem. They use valves that allow a person to open or close each one separately. But, it’s not nearly as exact as a thermostat. In fact, it’s common to see people regulate a room’s temperature by running the radiator and opening a window.

Both our homeowner’s new and old Mitsubishi systems avoid these problems. Now, he can set each room to the temperature he wants. And, the state-of-the-art air handlers will match it precisely.

If he puts each thermostat at the same setting, he gets even heating throughout the house. If, say, he wants the bedrooms a little warmer, he has that option. Our homeowner can also program the downstairs units to power down in the evening when he’s not using those rooms.

Along with improved climate control, ductless costs less to run than other options. For starters, they are Energy Star-certified. That means they meet government standards proving they use their energy efficiently.

First is the way it operates. We mentioned the heat pump uses a heat exchange process. There’s a lot of science behind it. But, the long and short of it is that it doesn’t burn natural resources like gas or oil to create heat.

Instead, it draws in what little heat there is outside in the winter. Then it amplifies that heat and sends it into the house. The system just needs a relatively small amount of electricity to work the cycle.

Next, the piping through which the air travels is airtight. This means no treated air gets wasted along the way. That’s not true of other hvac setups.

Then, the air handlers themselves distribute air evenly and quickly. Our homeowner won’t have cold spots anymore. And, the sooner the room is warm, the sooner the heater can power down.

Finally, he uses the radiators much less. In the spring and fall, our homeowner would turn on the radiators. Now, he just uses the units until it’s really cold out. Since it uses less energy, he’s paying less on his heating bills. That’s because he’s not running the less-efficient radiator heat nearly as much as he used to.

With all those benefits, it’s no wonder our homeowner decided to expand the system he’d previously installed.