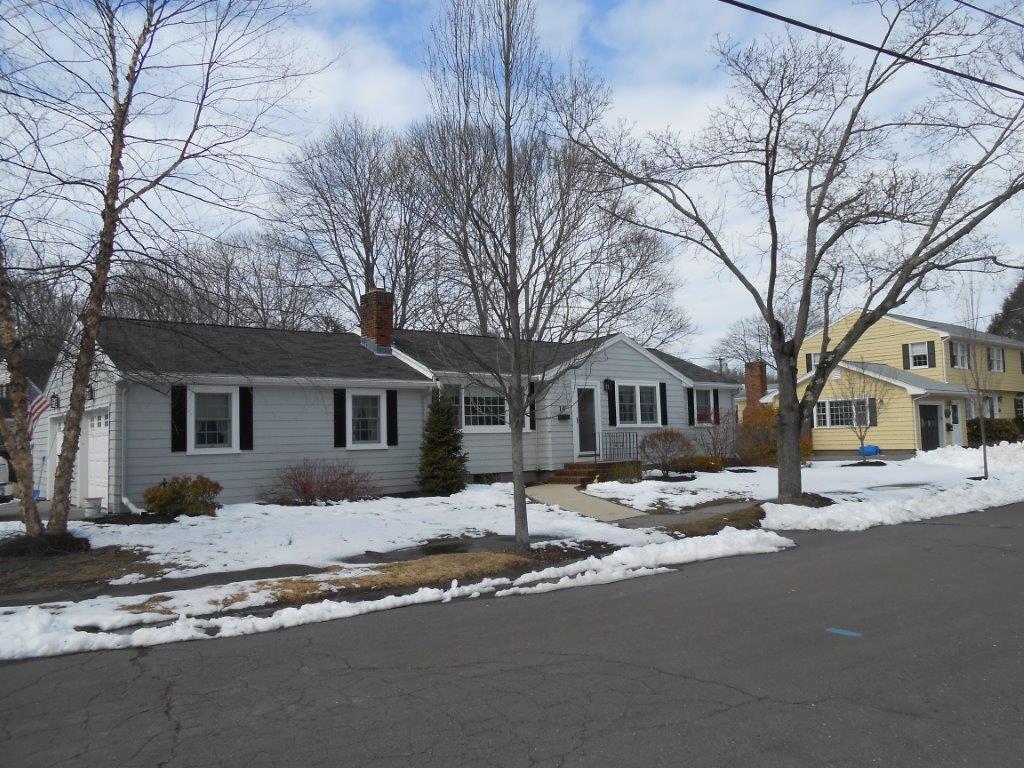 Our homeowner’s 60-year-old ranch had plenty of retro charm. Unfortunately, the hvac system was one of them. Fortunately, adding ductless air conditioning helped catch it up with the times.

Like most homes built around this time, this one didn’t have central air. That was mostly alright upstairs. Homes like these were designed for cross-ventilation. Just opening windows on either side of the house helped keep it cool.

The basement, however, was a different story. It was partially finished but would get too warm with no ventilation. It also got very humid in the summer.

An ac would address both those concerns. But, traditional setups wouldn’t work down there. So, our homeowners contacted N.E.T.R., Inc.. They read our outstanding customer reviews and saw that we had experience treating tricky areas such as this.

Once they called, we quickly got to work.

Problem: The finished basement in a 60-year-old ranch home in Beverly, MA did not have any ac. It also did not have central air.

Solution: Installed a Mitsubishi ductless air conditioning system with one an outdoor condenser and one indoor unit.

Cooling an older ranch home isn’t always easy. Homes built in the 50s and 60s were not made with central air in mind. Therefore, it’s often difficult to cool them properly. And, in this home, we had to add ac to the finished area downstairs. That area, in particular, doesn’t lend itself well to most solutions.

Reasons for this include:

Homes such as this one were built during the suburban housing boom after World War II. One-floor dwellings, in particular, were popular models. Many people turn the cellar into a rec room. It offers more living space in a smaller floor plan.

However, when this home was built, central air was rare in residential buildings. Just 10 percent of homes had them in 1965. What’s more, energy was cheap back then. So, efficiency wasn’t a big concern.

As a result, these homes are often drafty. Also, the windows especially were not well-insulated. They were designed to cool with cross-ventilation. And, on the whole, they were just drafty.

Meanwhile, rooms mostly underground especially are often tricky to cool. Even though they’re usually the coldest room, they’re not always the right temperature in the summer.

But, homeowners are limited as to what they can do down there. Window air conditioners are not really an option. The small vent windows in the cellar aren’t big enough to fit one.

Meanwhile, the ceilings are often too low for a ceiling fan. Besides, it’s difficult to get proper circulation with just the small window there. Here, the cellar is divided into rooms. That would break up the air flow.

Today, a portable air conditioner might be an option. It can vent through a small window. And, unlike a fan, it would decrease humidity. But, those aren’t energy efficient at all. They use a lot of power and costs a lot to run.

Fortunately, we had a better option. 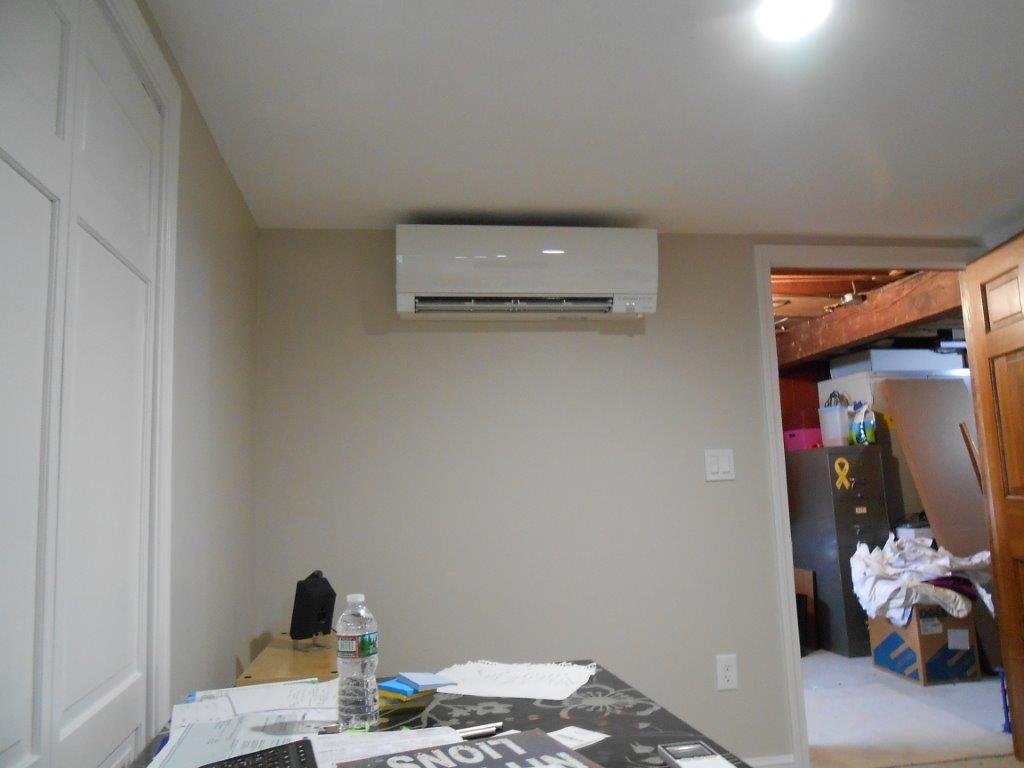 Ductless air conditioning in a basement

Ductless air conditioning is a great way to cool off a basement. It can be installed anywhere in the home. They’re quiet and energy efficient, and will also help manage humidity – a common concern in rooms mostly underground.

These are often called mini-splits because they have outdoor and indoor parts. Outside is a condenser that generates the cool air. Inside are the units, also called air handlers. These circulate the air.

Piping connects the two. That’s narrow, flexible tubing we can run between the rafters of a wall. This way, we can mount the unit anywhere. There’s no worry about being close to a window or building ductwork.

That’s why a system such as this works well in a cellar. It’s just as powerful as central air. But, it’s much more flexible. We don’t need to do any construction to get the unit where it’s needed.

And, we don’t have to use the small window for ventilation. That gives us plenty of options for where to place it. Now, the room stays cool and still gets a little sunlight.

Finally, a mini-split will help manage humidity. That’s especially important in a here. It’s the room that often gets moist as rainwater and other moisture in the ground seeps inside.

Part of an air conditioner’s job is to remove humidity. That helps cool down space. Since this system is just as powerful as a central unit, it takes care of that, too.

In this house, we added just one unit in the finished part of the cellar. This way, it treats only the area that needs it. And, it doesn’t have to be near a window. 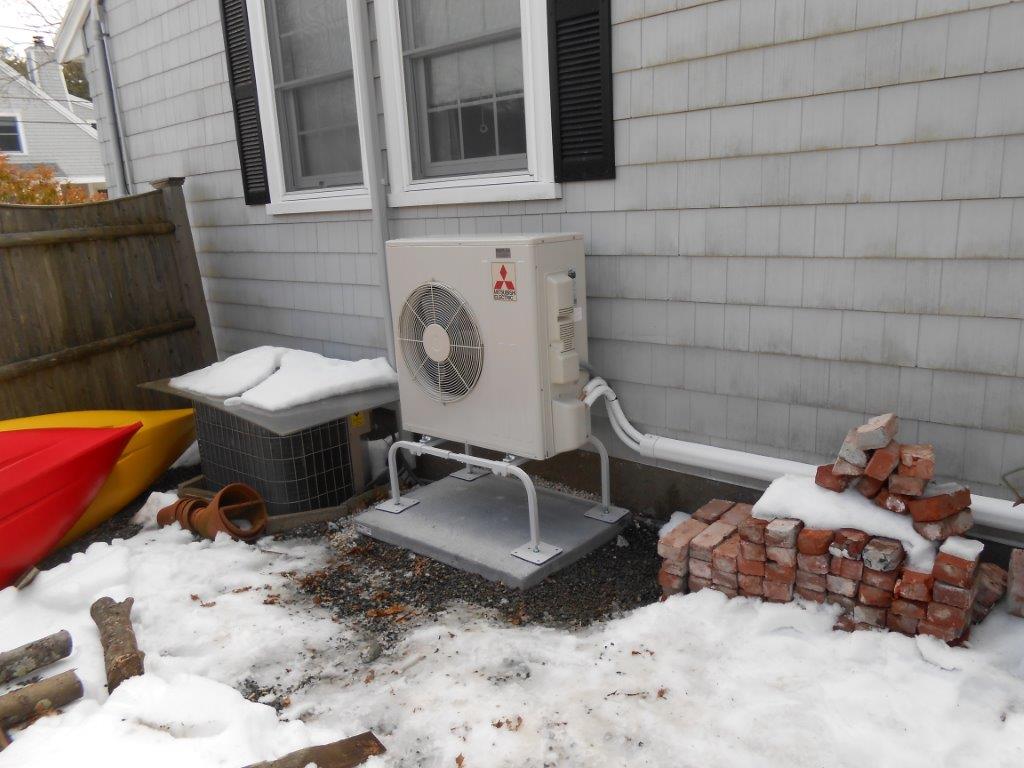 Saving money with a mini-split

Our homeowner’s new mini-split provides powerful cooling. It also costs less than other options that do the same job. In this home, we just installed it in the one area. But, it still affects the entire home.

For starters, the system is a certified Energy Star appliance. It meets criteria showing it uses less energy to produce the same effect as ac’s that work just as well. That helped our homeowner save money up front.

That’s thanks to MassSave, a group of utility companies in the Bay State. They offer cash incentives for people to switch to Energy Star appliances. In this case, our homeowner got a $500 rebate on the installation costs.

Next are the monthly savings. Of course, the electric bill for this house will rise slightly. That’s because they added climate control to an area that didn’t have it before. But, it will still be much less than any other solution. Those are not nearly as efficient as what we installed.

And, the cool air in a cellar can help keep the temperature down in the rest of the house. For starters, there’s no less moisture overall n the home. And, it’s got an especially cold foundation. That helps keep the main floor colder.

Now, our homeowner has more living space that’s the right temperature in the summer. And, he’s paying much less for it than he expected.

Are you looking to add efficient climate control to your basement? Contact us, and we’ll design a system that’s perfect for your home!