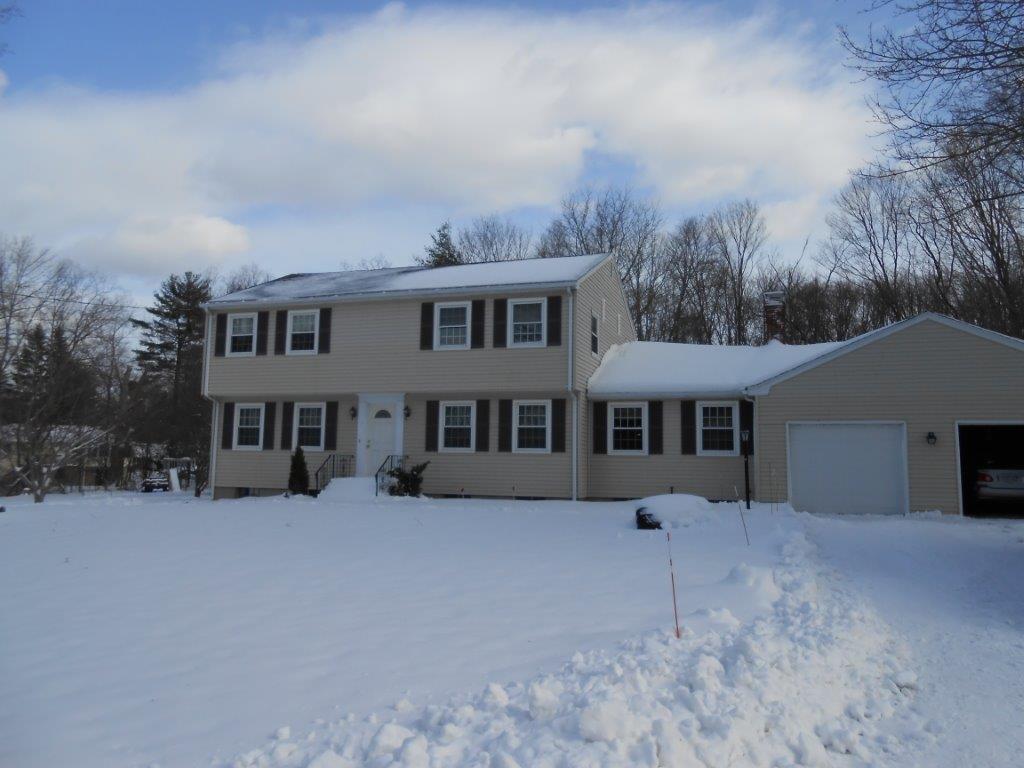 Our homeowner in Andover, MA was more than ready for a major HVAC upgrade. Her colonial home was spacious and sat on a large piece of land. But, it never had great heating and cooling.

For starters, the home had electric heating. It certainly gets the job done, but it takes a long time to do it. Electric heat doesn’t warm a house nearly as quickly as other sources. That’s not exactly ideal for winters in New England.

Electric heat is also more expensive than, say gas or oil. On the one hand, an electric furnace lasts longer gas or oil burners. On the other, the unit costs for electricity are just more than those other sources.

They offered some cooling. But, the units were very loud and cost a lot to run. And, they never cooled the home as well as central air.

So, for years the homeowner spent her winters waiting for the house to warm up. And, when it got hot out, she got by using ceiling fans and open windows as much as she could. It was time for a change.

Our homeowner reached out to N.E.T.R., Inc. after reading our many, many positive reviews. She was looking for an entirely new system. It needed to be cost-efficient and easy to maintain. And, it should have more benefits than her current furnace.

We toured the home and drew up a design for a ductless heating system. It would meet all of her requirements. And, it would even offer some advantages she hadn’t even considered yet.

Problem: A colonial home in Andover, MA had electric heat and no air conditioning. The homeowner wanted a cooling system more efficient and cost-effective heat. 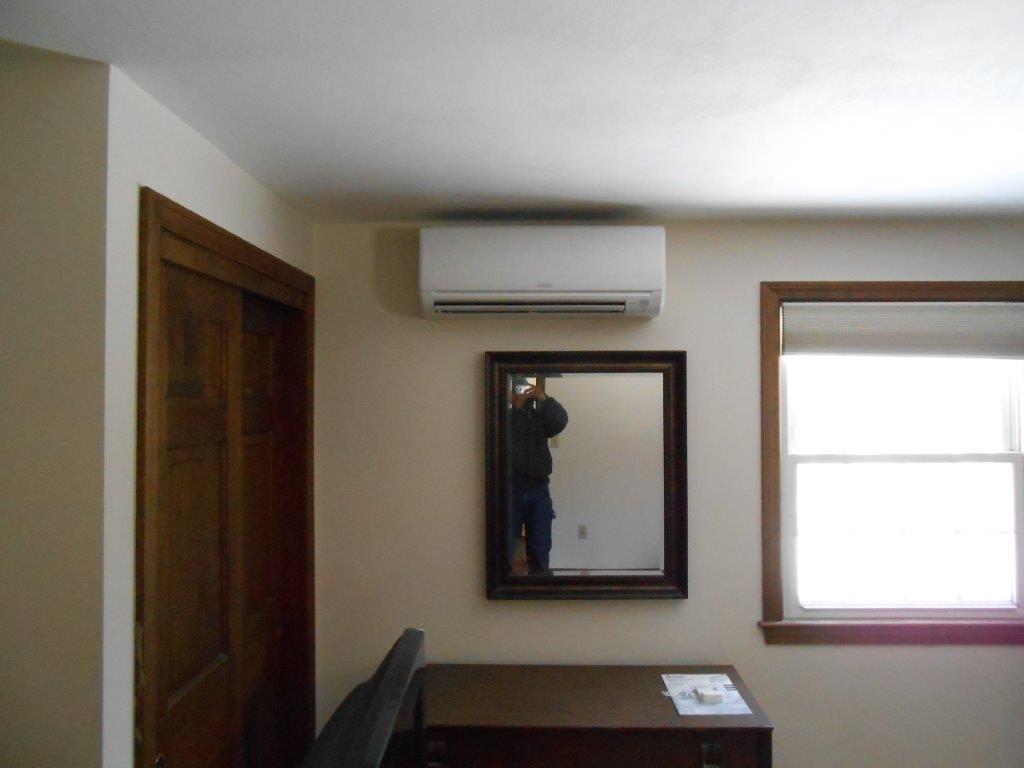 There’s a lot of variety in colonial homes. The design dates back to the 1600s —- hence the name. Others are modern, but use the same basic model: A square shape and symmetrical design with the front door right in the center of the home.

It’s a stately, traditional look. But, it has some drawbacks when it comes to heating and cooling. First, this style of homes usually has a lot of windows. That means a lot of drafts. Heated air can seep out, and winds can blow in. During the winter, this can drive down the temperature.

Then, there are attics and garages. These can add space and aesthetic value to a home. But, they also make it harder to heat and cool.

In the winter, warm air rises into the attic. As the heat goes up, cold air seeps into the bottom of the house.

It’s usually not a problem on the first floor, because that’s where the thermostat is. The heater will kick on and keep working until that area reaches the temperature you want. But, then it will turn off even if other parts of the house are still cold.

And, often that part is the second floor. The heat keeps moving into the attic and then escapes through the roof. However, the thermostat still reads okay for the first floor, so the bedrooms become chilly.

Meanwhile, this has an opposite effect in the summer. Warmth naturally moves toward cold spots. Now, the hot air rises and collects in the attic. But the air outside is warm as well, so the indoor heat doesn’t continue moving as much. With the heat collecting there, the more air that rises starts to accumulate on the top floor.

Finally, many homes like these were built before central air conditioning was available. It wasn’t until the 1970s that this feature was available in homes. This home was built before that, and so it was never outfitted for it.

Fortunately, a ductless system addresses these problems much better than electric gas or oil heat, and central air, ever could. And, it costs less to run than those options.

A significant benefit of a ductless mini-split system is “zoned” heating and cooling. This is different from most systems that have a single thermostat in the home. With a zoned system, almost every room of the house gets treated separately. It’s more efficient than just using one measure for the entire home.

Here’s how it works:  The heat or cooled air comes from an outdoor heat pump. It’s is like an outdoor ac condenser for central air. There are two significant differences, however.

First is how the system treats the air. We’ll get into that a little later. The second is how that air travels through the home.

As the name implies, this system does not use traditional ductwork and vents. Instead, the air travels through very thin, very flexible tubing.

This setup creates an important difference. First, our installers can run those tubes anywhere in the home. They can snake it through walls without having to do any major work.

The tubes then connect to the indoor units. These are long, rectangular air handlers that mount on the walls. Since the tubing can go anywhere, our installers can find the best spots for each one.

Usually, the indoor units are mounted high on a wall. They’re hardly noticeable that way. It also helps that they’re whisper-quiet: Unless you are standing right under one and listening to it, you won’t even notice that it’s on.

Here’s where the zoned part comes in: Each indoor unit has enough power to heat or cool one or two rooms. That’s why we install more than one in each home. Each area is a different zone.

And, each indoor unit has its own thermostat. Now, there are multiple zones with individual indoor air handlers regulating the temperature.

Now, if the upstairs rooms are still cold after the first floor heats up, that’s fine. The systems in those rooms will stay on even after the ones downstairs shut off. And, the opposite occurs in the summer: the air handlers in the warmest rooms keep cooling after other zones turn off.

This arrangement eliminates the uneven temperature that is common with just one thermostat for the whole house. If every indoor unit is set to the same temperature, you’ll actually get that temp across the entire home.

Installing a new HVAC system for an entire house is a significant investment. But, installing a ductless mini-split system doesn’t cost nearly as much as electric, gas or oil heat. And, it’s cheaper than window air conditioners and even central air.

The ductless systems are Energy Star-certified. This designation means they meet government standards showing they use less energy than comparable systems. Thus, our homeowner spends less money on her monthly utility bills.

The savings start with the outdoor heat pump. The pump doesn’t use electricity to generate heat. That’s what cost our homeowner a lot in the past. Instead, it just uses a small amount of energy to get started.

Without getting into the science of it, a heat pump works by creating heat exchanges. In the winter, it draws what little heat there is outside and amplifies it. Then it sends that heat into the home.

In the summer, the pump draws heat from the home. That leaves cool air. Then it creates a heat exchange where the warmth exits the system. The cold air that’s left gets pumped back in.

Next, is the tubing that leads carries the air. These are sealed much better than ducts and way better than window ac’s. Those systems tend to lose heated or cooled air along the way. When that happens, the system needs to use more energy to create more warmth or cooling. With ductless, almost none gets wasted.

As a result of this efficiency, the system costs less to run each month. Now, our homeowner sees much lower energy bills.

And, because the system is so efficient, our homeowner also got a break for installing it. In the Bay State, two organizations encourage people to install energy-efficient HVAC systems. They use cash rebates as incentives.

While we were setting up our homeowner, we made sure she knew to apply for rebates. As a result, she saved $3,000 on her installation. One group, Mass Save, gave her a $500 rebate. Meanwhile, the Massachusetts Clean Energy Center gave her $2,500.

The cash-back made a massive dent in our homeowner’s upfront costs. And, with the savings on her energy bills, the system will just about pay for itself in a few years.