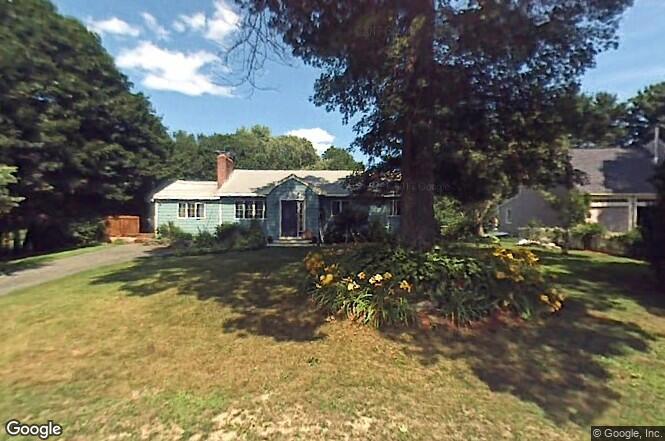 Sometimes, even the best heat can’t quite warm a home well enough. That was the problem our homeowners in Concord, MA were experiencing.

Their ranch home had oil heat coming through baseboard heaters. And, even though oil burns hotter than other heat sources, parts of the home were still too cold. But, this was due to the HVAC layout, not the heat itself.

Older homes like this one often have outdated HVAC systems. Technology improved greatly over the past few decades. As a result, people know they can get better results for less money with upgraded systems.

These homeowners also had a problem in the summer: The house was too hot. For years, they’d used window unit air conditioners to cool off a few parts of it. That’s because the home was built before central air was widely available in homes.

These could all be solved with a major HVAC overhaul. But, that would be expensive and require construction in the home. Instead, the homeowners wanted a solution that would be easy to install, easy to use, and easier on their energy bills than what we had now.

They chose N.E.T.R., Inc. to come up with a solution for them. After reading our outstanding products reviews, they knew we could provide an efficient and cost-effective supplemental heating solution for them.

Problem: A family with a ranch home in Concord, MA had could not get the family room and master bedroom warm enough in the winter with oil baseboard heat. They used window air conditioners instead of central air in the summer.

Solution: Installed a Mitsubishi Comfort ductless heating and cooling split system with units in the family room and master bedroom leading to an outdoor condenser unit.

Installing a ductless HVAC system was the best way to address everything this family needed. It provides supplemental heating and replaces inefficient window air conditioners. And, it does not require a lot of work on the home.

Dual zone ductless heating and cooling does all this thanks to its design. As the name implies, it doesn’t require big, bulky ductwork to deliver climate control. This allows our installers to place the system wherever it will work best. They don’t have to worry about using existing ductwork or doing major work to install new ducts and vents.

Ductless heating and cooling systems starts outside with a condenser unit. This is the part of the system that provides the heat in winter and cool air in the summer. That heat or cooling travels through very narrow, flexible piping instead of ductwork.

This is a big difference. Instead of metal ducts usually more than a foot wide, the piping is less than three inches in diameter and is flexible. This means our installers easily run it through rafters and in between beams in your walls.

Finally, that piping attaches to ductless units. Installers can mount the unit anywhere because it doesn’t require a vent. So, they can find the best spot in any room. Usually, that’s high up on a wall, mostly out of sight.

The unit itself covers the very small hole where the piping comes through the wall. And, each Mitsubishi wall air conditioner and heater has a remote control, so you don’t have to reach up to change the temperature or turn it on or off.

What Are Ductless HVAC Systems are Useful For?

A split system heat pump is especially useful for supplemental heat. Since oil has a very high flash point, it can heat a home quicker than gas or electric systems. However, the baseboard heaters in this home didn’t do a great job of moving that heat around.

Now, our homeowners can use the dual zone ductless heating and cooling system along with their oil heat. It can give just a little extra heat in the rooms that need it. Otherwise, they’d have to turn up the heat in the whole house just get the living room and master bedroom as warm as they wanted it. 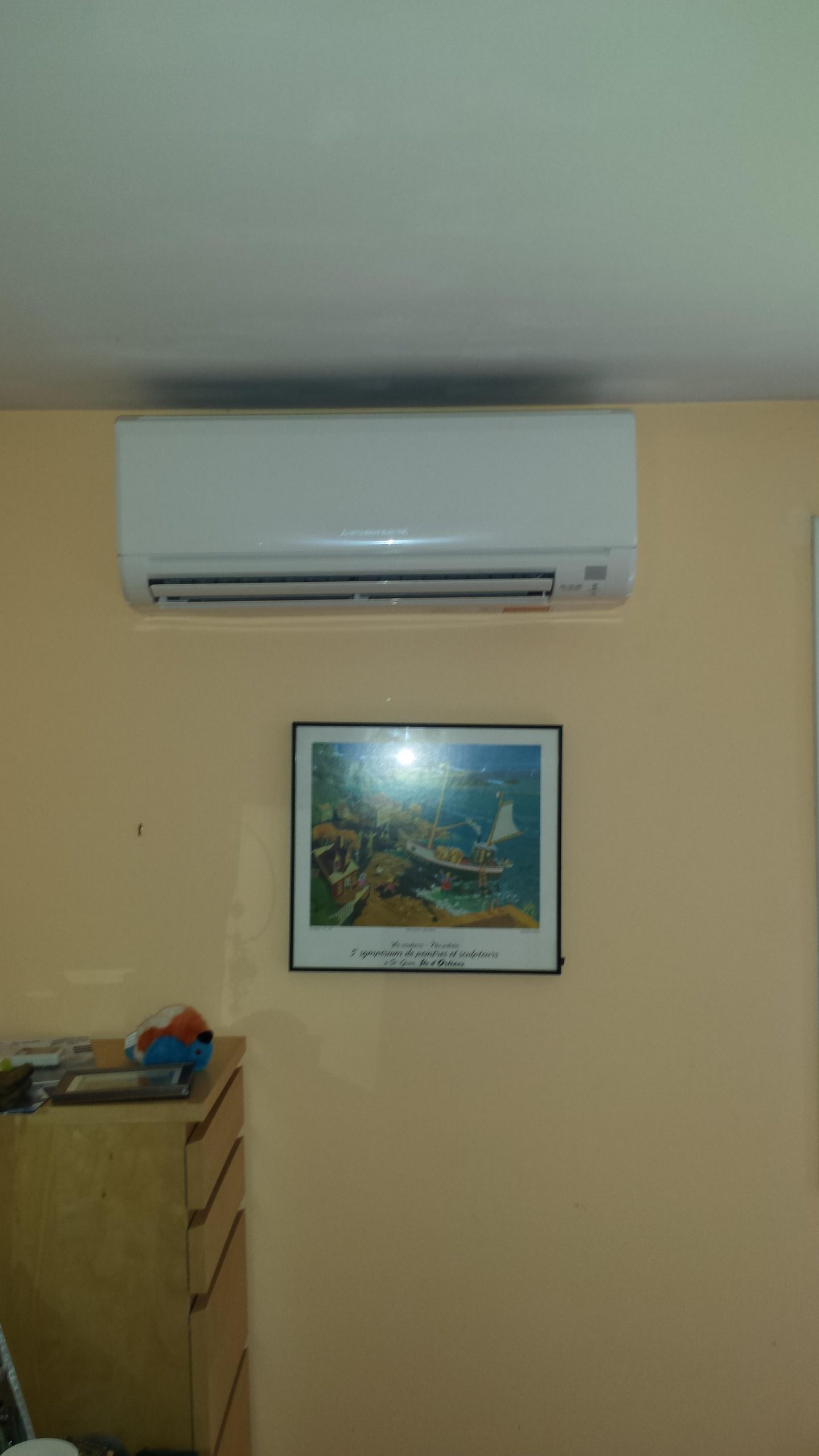 Why Ductless HVAC Is More Cost-Efficient Than Window Air Conditioners

Ductless HVAC also goes a long way in the summer. And, it does so for many of the same reasons that make it so useful in the winter.

This is thanks to the “zoned” aspect of ductless heating and cooling. Unlike a central air system or even a furnace, ductless HVAC units don’t work from one thermostat. Instead, each unit has its own.

Now, our homeowners can set the temperature in each room, or zone differently. In the winter, this means they can customize the heat everywhere to make sure the whole home is evenly heated. In the summer, they can use this to cool off just the parts of the house that need it.

Of course, that’s kind of like how window air conditioners work. After all, each window unit works by itself. But, those a/c’s are old, noisy and inefficient. Ductless units can cool better, faster and for less money.

There are a few reasons for this. First, the technology is better. Window units, especially older ones, just can’t deliver as much cool air as the ductless HVAC units while using as little energy. Ductless units are also whisper-quiet. This contrasts with the dull roar that old window units often make when they’re working.

Also, the area around them is usually not sealed.  This allows cool air to seep outside instead of staying in the room. Instead, ductless units are completely indoors. That cool air stays in the room and doesn’t go out the window.

All these points show the convenience of ductless HVAC. And, they explain how well they provide climate control. But, there’s one more big part of a ductless system: saving money.

This dual zone ductless heating and cooling system especially goes a long way toward lowering this family’s monthly bills. And, it does so in quite a few ways. 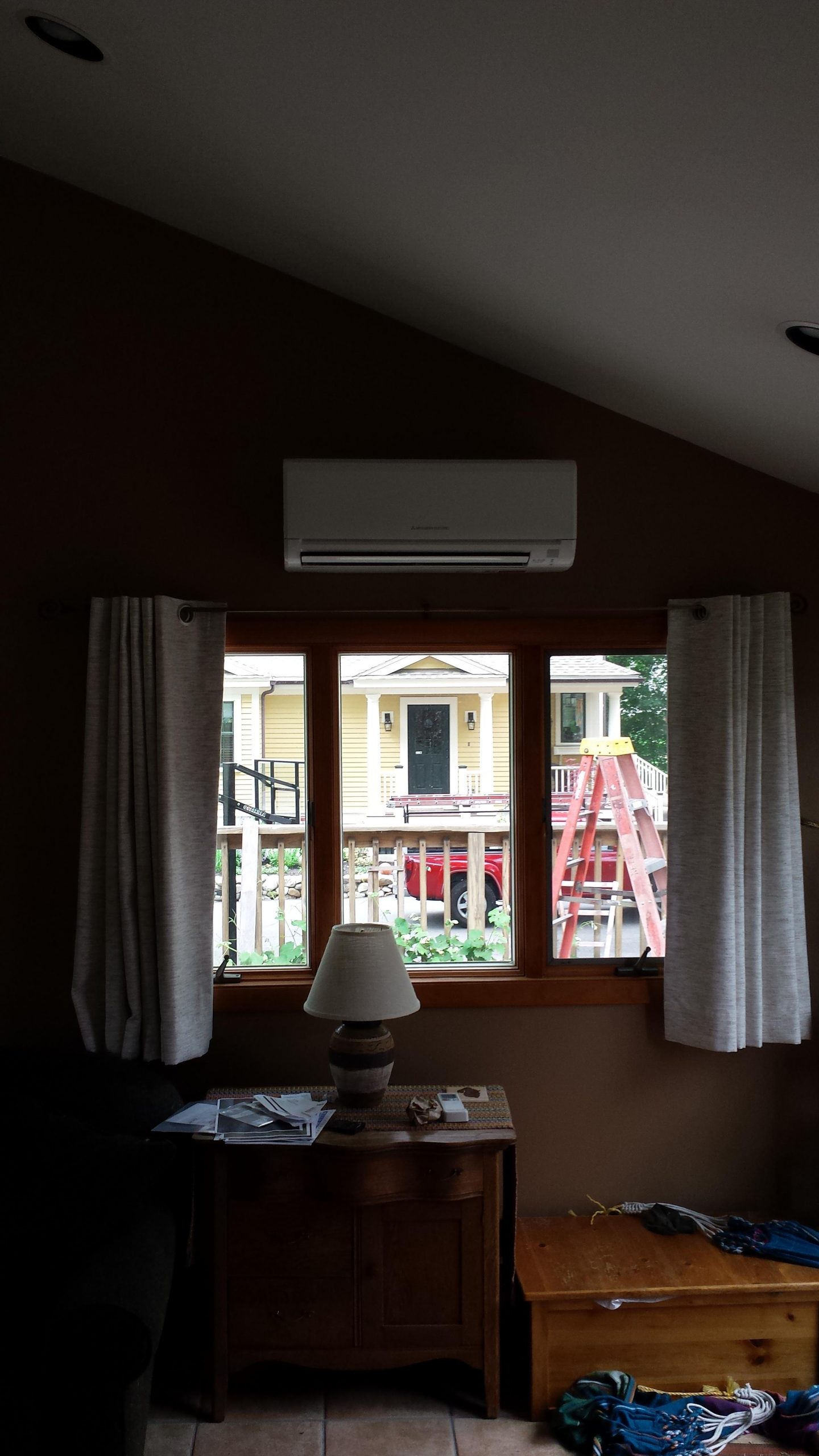 First, there’s the increased efficiency. As we mentioned before, our ductless system uses less energy than other systems to provide hot or cool air. That includes the oil heat and window a/c’s this ranch home had. Using less energy each month means lower monthly energy bills.

Our homeowners also see a lot of savings in the fall and early spring. Since oil heat burns very hot, it can be a little bit of overkill outside of the winter.

Now our homeowners have a better option when the weather begins to cool or just begins to get warm. They can wait a few extra weeks in the fall before firing up their oil heat. And, they can turn it off a few weeks earlier in the early part of the year. Using their ductless heat in those weeks will cost them much less than burning oil.

Finally, there’s the zoned part. Remember, each ductless unit has its own thermostat. This means our homeowners can turn down one unit when they don’t need it while turning up another when they do.

For instance, now they don’t need to heat both the living room and master bedroom at night. When they’re sleeping, they can turn down the unit in the living room because no one’s using it. Less energy, once again, means lower bills.

The opposite happens during the day — or in the summer. When it’s warm during the day, our homeowners can cool off the living room much more than the bedroom. Then, when it’s time for bed, they can turn up the bedroom unit to make it cooler.