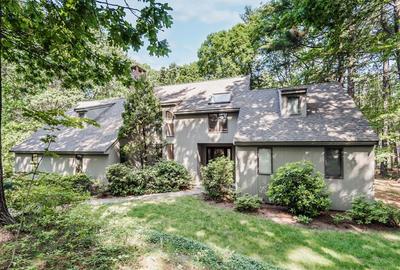 Our homeowners were looking for the perfect hvac system for their new home. They were building a cape-style home in Andover, MA and wanted a system that was energy-efficient.

Since this was new construction, our homeowners had their choice of heating and cooling options. But, they had heard a lot about ductless units and wanted to find out more.

They chose N.E.T.R., Inc. after reading our outstanding customer reviews online. And, they saw that we are the Number-One Elite Diamond Dealer Contractor in New England for Mitsubishi ductless systems.

We walked them through all the benefits of Mitsubishi Electric HVAC units: They use less energy than central systems or portable heaters and ac’s. They’re also quieter and require much less maintenance. It wasn’t long before they were ready to go ductless.

Problem: Homeowners were building a new cape home on North Andover, MA. They wanted an energy-efficient heating and cooling system that was low maintenance and resulted in low monthly energy bills.

Solution: Installed a Mitsubishi ductless HVAC system. It comprises seven units throughout the first and second floors and connects to an outdoor heat pump.

How do ductless HVAC units work? 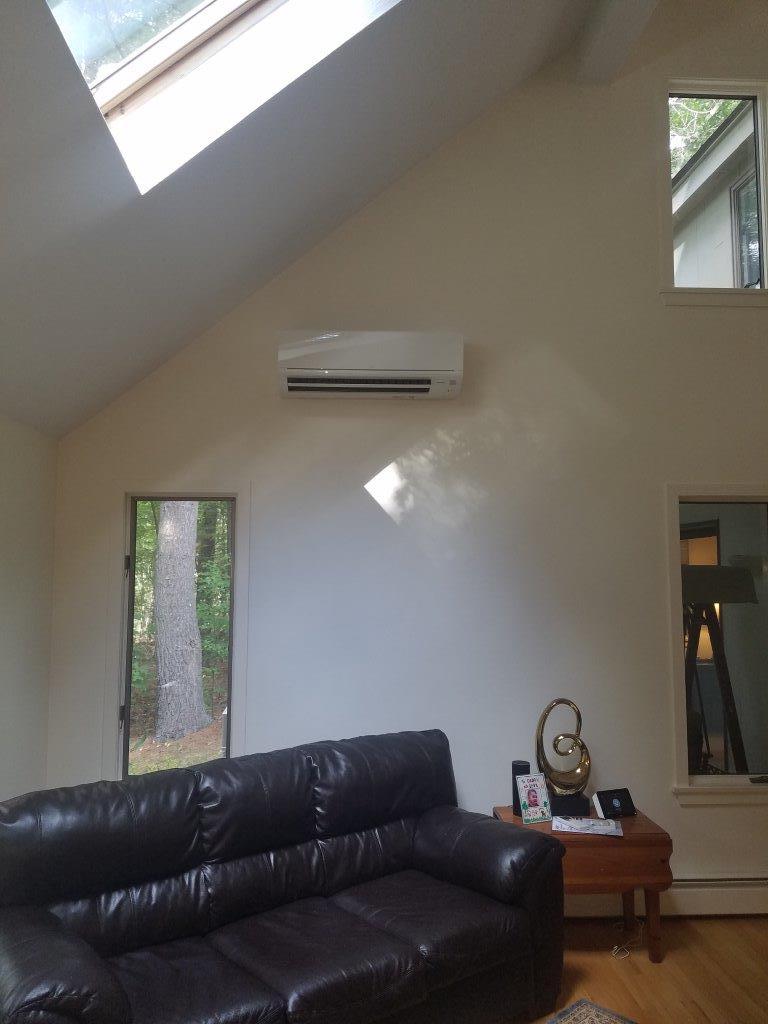 Ductless HVAC units work by combining the flexibility of space heaters and window air conditioners with the power of a central heating and cooling system. They are also much more energy efficient, using less energy to provide the same climate control as comparable units.

The system starts with an outdoor heat pump. This unit provides warmth or cold air.

The pump uses a heat exchange process. We’ll get into it a little later. But, in a nutshell, it doesn’t use energy sources such as gas, oil, or electricity to generate heat or cooling. Instead, it transfers heat from outside and inside the home to provide climate control.

It sends treated air through the house using very narrow, plastic tubing. That tubing, or piping, spreads throughout the house. Our installers need to snake it through the walls like electrical wiring.

This is in contrast to traditional ductwork. Ducts are much bigger and bulkier. They cost a lot more to design, build and install. They also take up a lot more space than the tubing. And, they lose treated air along the way.

At the other end of our system are the HVAC units. These deliver the treated air to the house. Installation is simple: Our installers determine the best spot in the room for them. Usually, that’s high up on a wall where they are mostly out of sight.

For installation, our techs mount them on the wall. Then, they connected the tubing in the back of the unit. You won’t see the tubing at all and will barely notice the units. Even when they are working, they barely make a sound. Unless you’re standing right under a unit and listening for it, you won’t hear anything from it at all.

What are the benefits of zoned HVAC? 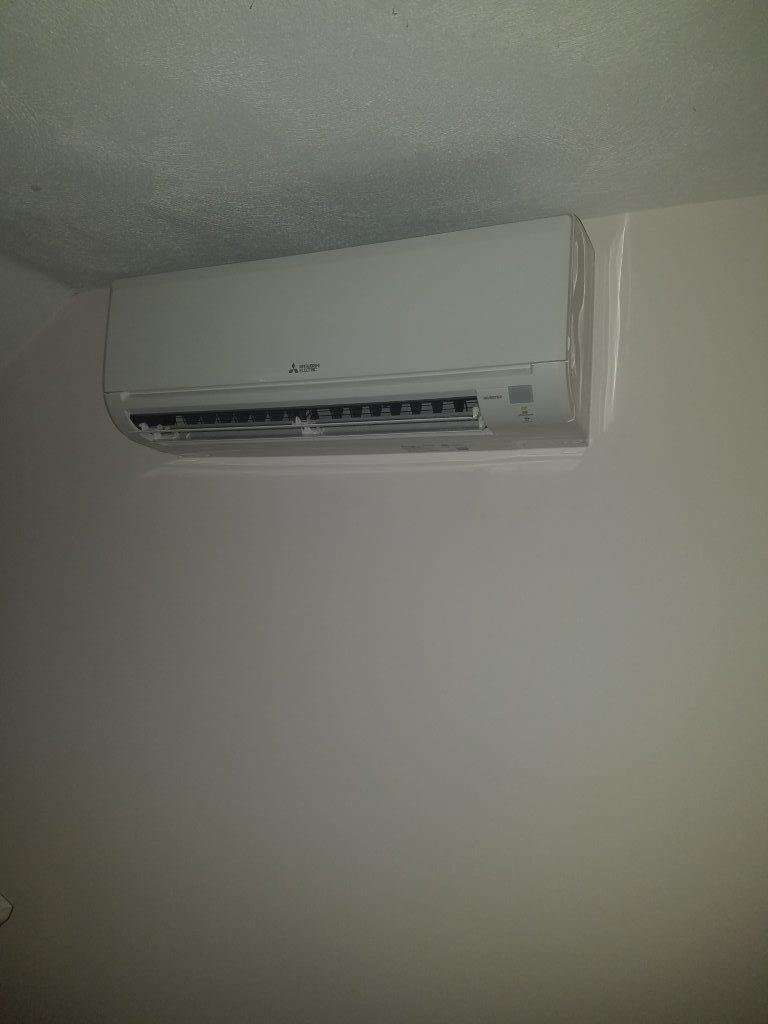 A significant benefit of ductless units is zoned HVAC. With this system, each unit handles the climate control for a different room, or zone, in the home. This setup prevents problems such as uneven heating and cooling. That’s when some parts of the house are hotter or colder than other spots.

With traditional HVAC, usually, one thermostat controls the entire house. The problem with this, however, is that different rooms warm or cool faster than others. Generally, in the winter the bedrooms take longer than the rooms downstairs to warm up. The opposite occurs in the summer.

Since there is only one thermostat, the system treats the room with the thermostat perfectly. But, it doesn’t measure for the other places. That’s where a zoned system is better than other options.

Here, each unit has a thermostat. That allows each one to work independently from the others. If the master bedroom, for instance, takes the longest to warm up, that unit will continue providing heat after the others shut off.

Meanwhile, the first-floor rooms that warm up first won’t get overheated because the system has to stay on to treat the colder areas. Instead, those units shut off before the others.

A zoned system also allows our homeowners to customize their heating and cooling. If they prefer the bedrooms cooler than the downstairs, for instance, they can set those thermostats differently than the others. Or, they can go for nice, even climate control throughout their new home.

How does ductless save money? 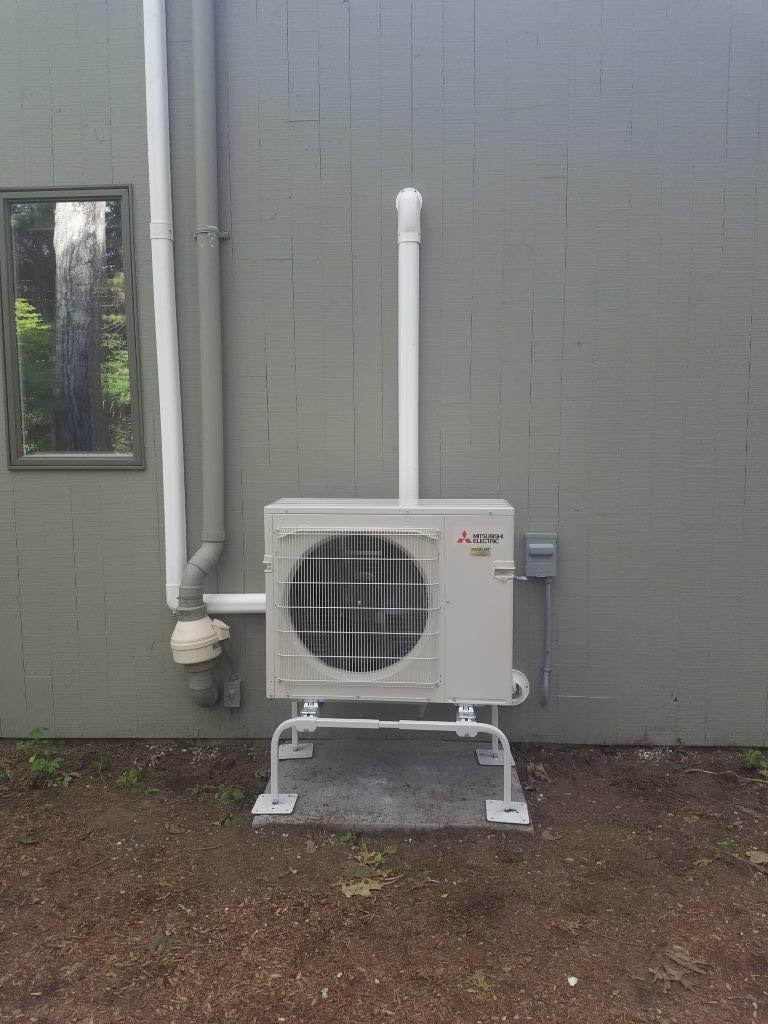 Compared to other HVAC options, the Mitsubishi Electric HVAC units use less energy to heat or cool a home. As a result, they cost less to run. Homeowners save money this way on their energy bills.

There are a few ways in which the Mitsubishi Electric units use less energy than a central system. First it the heat pump. As we mentioned before, it uses just a little electricity to start working. This is different from using a power source to generate heat or cold air.

Inside the pump is coolant liquid that stays in the system all the time. Since warmth is attracted to cold, heat is drawn to the coolant. This drives the heat exchange process.

In the winter, the system draws what little heat there is outside into the system. A condenser magnifies the heat and sends it into the house.

When it’s warm outside, the heat pump uses the same process to draw heat out of the house. That leaves cool air inside. Then the system works in reverse to remove the heat and send cold air back inside.

That’s is a different process than generating heat by burning, say, oil or gas. Since the heat pump uses a closed system, it just needs a small amount of power to run the condenser.

Next is the piping. These tubes are sealed tight. This prevents treated air from escaping before it’s supposed to get out.

Ductwork, on the other hand, isn’t as closed off. Some of the heat or cooled air traveling through ductwork leaks out before it reaches the vent. Then the system has to generate more to create the desired effect.

Finally, the units themselves save energy — and money — in a few ways. Since each one works independently, the system doesn’t overwork to warm or cool the hardest rooms to reach. When those other units turn off, the whole system uses less energy.

All those factors result in lower energy bills each month for our homeowners. And, because the units are so efficient, our homeowners received a rebate for installing them.

The group Mass Save offers cash incentives for people to install energy-efficient HVAC systems. The HVAC units are Energy Star-certified. They meet federal standards showing they use less energy than other models.

As a result, our homeowners received a $600 rebate toward installing their system. Now, they have better climate control than if they’d gone with traditional ductwork. That’s a finishing touch on their new home.