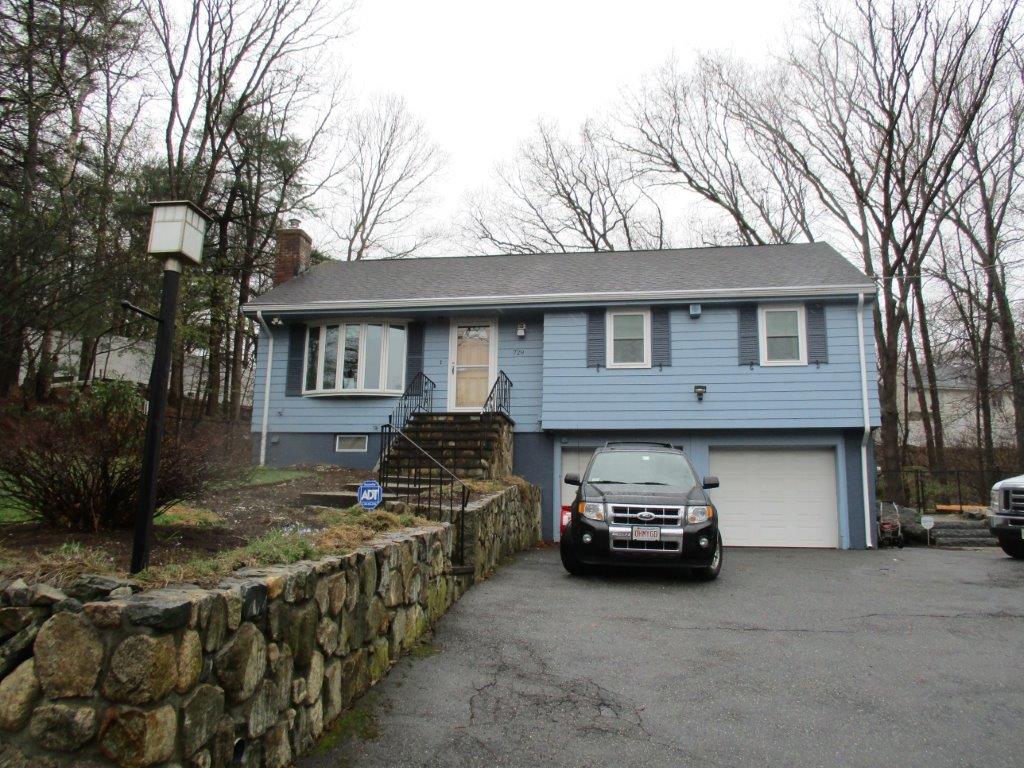 When it’s time to upgrade your home, it’s also usually time to improve your HVAC system, too. That’s what the owners of a split level home in Lynnfield, MA decided to do.

They were improving part of their house, including their TV room. That area always got too hot in the summertime. They were looking for a cooling solution that would work efficiently and not require a lot more work. For them, ductless heating was the way to go.

Problem: Homeowners never had air conditioning in their Lynnfield, MA split level home. The TV room got too hot in the summer.

Split level homes became popular after World War II. That’s when more and more people moved from cities to new, nearby suburbs. Developers struggled to keep up with demand. A challenge they often faced was fitting as much square footage as they could on a small lot.

In response to this, these homes became popular. They resembled ranch homes but had extra living space over the garage. This gave people both a place to park their cars and a few extra rooms.

However, they weren’t exactly the easiest to keep cool. In a way, the first floor of a split level is kind of like the second in other homes. That’s because the basements aren’t completely underground, where they stay cool. Many times they’re partially above ground. And, there’s living space above the garage, well above ground level.

The problem here is a simple one: hot air rises. This means cool air sinks to the garage and basement. Then, the hot air moves up to the living space — and stays there.

Of course, central air would go a long way in a home like that. But, that wasn’t really an option when many of these homes were built. Back in the 50s and 60s, the best most people could do was get some window units.

That’s especially so when it comes to older houses like these. Often, these and ranches in the suburbs were for young families or working class people. They often weren’t the people who could afford the latest-and-greatest. Having a home out of the city — and with a garage, to boot — was already a luxury.

Central air wasn’t really commonplace until the 1970s. Even then, not everyone had the money or desire to retrofit their house. Installing central air meant a large outdoor unit connected to ducts and vents inside. In some cases, an HVAC company would have to build more ductwork. That all added up to hefty price tags many people couldn’t afford.

Today, however, ductless mini-splits can provide all the comfort of central air. And, they can do it without the costly and challenging ductwork. Finally, a ductless system will save a homeowner money in the long run. 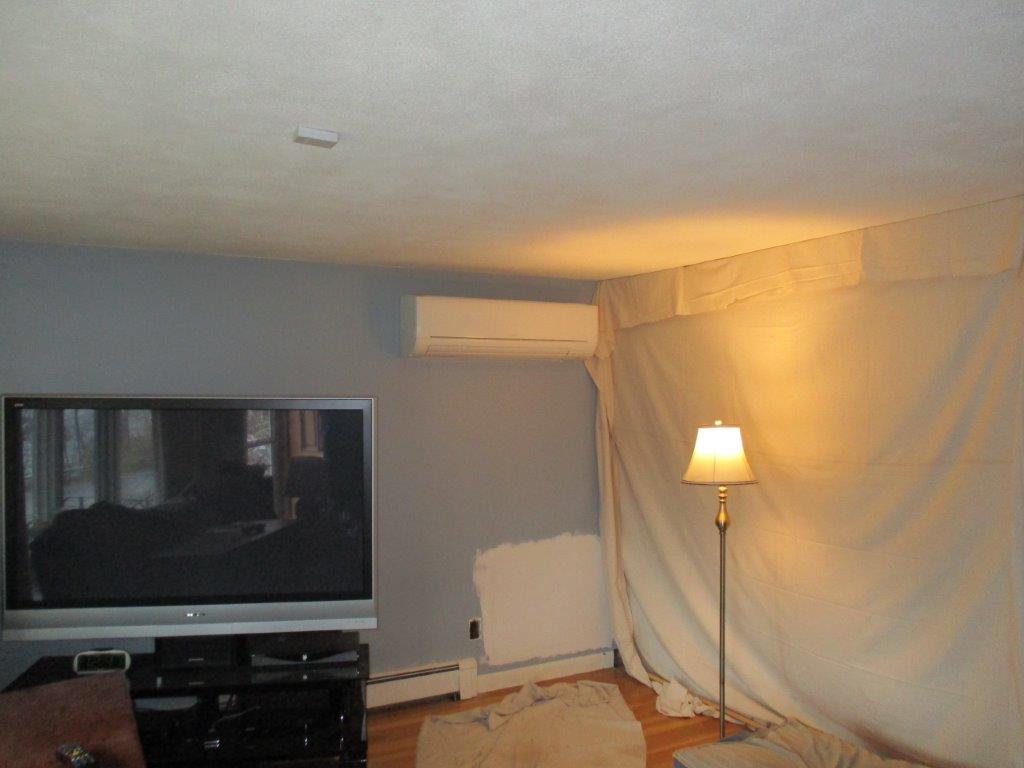 When it came time to upgrade the a/c in this Lynnfield, MA home, the homeowners chose us to do it. They’d read all our great reviews and knew we provided quality work and great customer service. Their job would be no exception.

From the start, it was obvious that a Mitsubishi Electric ductless system was the way to go here. This was especially so because the homeowners didn’t need to cool their entire home. They just wanted more climate control in the T.V. room. In this case, a single ductless high-wall unit combined the small area of a window unit with the efficiency and aesthetic of central a/c.

That’s due to how ductless HVAC systems work. Here, cool — or hot — air comes from an outdoor unit. It travels into the house through small, flexible tubing. On the other end is a wall-mounted unit, either high-wall or low-wall. This is what distributes the air to the room.

Thanks to that tiny tubing, ductless systems don’t need big, bulky ducts and vents. All it takes is a tiny hole in the wall to run the tubing. Many times, that hole goes behind the indoor unit anyway, so you don’t even see it.

Then, there are the indoor air handlers themselves. They’re sleek and not especially noticeable. That’s a lot different from a window a/c unit, which blocks out the sunlight. They also take a lot less room and effort than carving out part of your wall and shoving a unit in there as well.

Then, there’s how mini-splits work. For starters, they’re way quieter than old window units. Most times, you won’t even hear them at all when they’re working. That’s a big advantage, especially for a T.V. room. Now, our homeowners won’t have to crank the volume when their a/c is running. 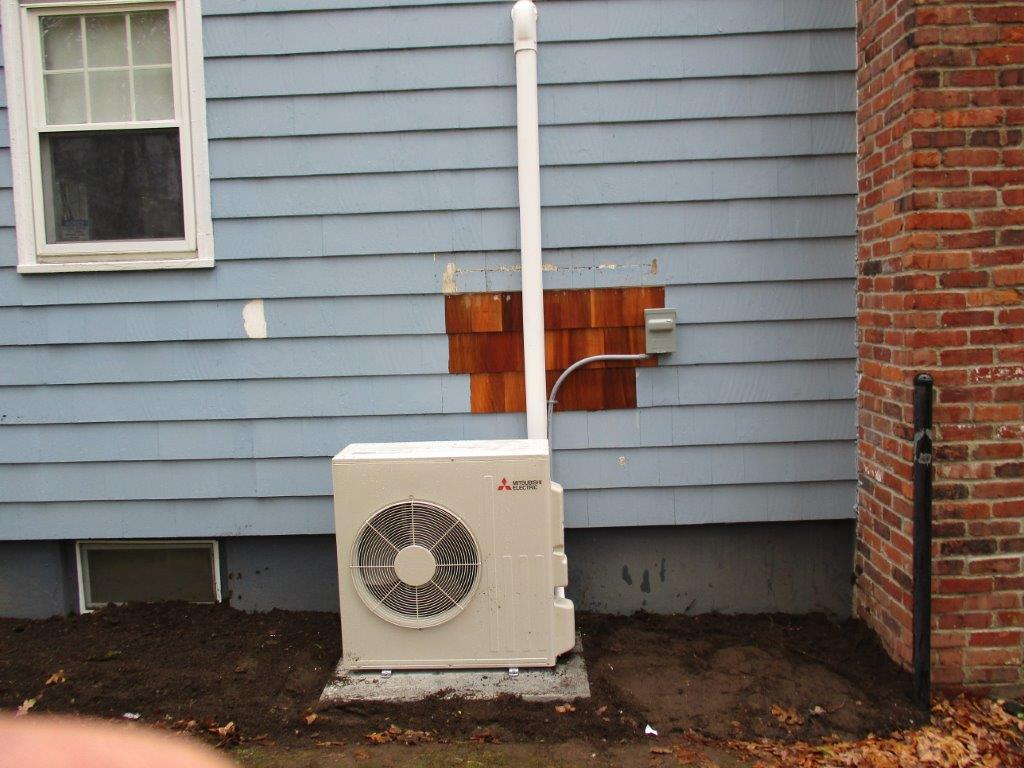 Even though these systems are powerful, installing one for just one room isn’t overkill. A ductless air handler heats or cools just one area. If the homeowners wanted to treat the whole home, we would install indoor units in different areas of the home.

For this split-level, we went with a single-zone installation. This is basically a smaller version of what would heat or cool the entire home. A larger system would use one or two outdoor units powering multiple indoor units. In this case, we installed an outdoor condenser attached to just one high-wall unit inside.

There’s another advantage to this: We can add on later if the homeowners want to do that. Remember, each indoor air handler works independently. That means our homeowners can consider converting their entire home to ductless down the road. They could do that all at once or zone by zone. Since ductwork isn’t a factor they have a lot of flexibility.

Of course, the question is, why would someone decide to get rid of their old heating and air conditioning and convert to ductless HVAC? Well, energy efficiency is a big reason. And, that translates into saving money.

Ductless systems use less energy to operate than older HVAC systems. Some of this is purely technological. Manufacturers have updated old designs to work better. The Mitsubishi outdoor unit and high-wall unit we used in this home are Energy Star-certified. That means it passes government regulations showing it’s more efficient than other units.

Then there’s the zoned aspect. Each indoor unit can be controlled separately. That means you don’t necessarily have to run every one all the time. You can set each one to a different temperature. Or, you can have some turned on and leave others off. That uses less energy — which costs you less money.

Of course, for our homeowners in Lynnfield, that’s something to think about for the future. For now, they’re looking forward to relaxing in front the TV in the summertime. Now, they won’t be too hot, and they’ll actually be able to hear their programs over the air conditioning.

Do you want a better and more cost-effective and efficient option for heating and cooling your home? Contact us and we’ll design the perfect Mitsubishi Electric ductless HVAC solution for you!