There are as many ductless HVAC options as there are types of homes in Boston. Mike Cappuccio, owner of N.E.T.R., Inc., discusses the ways to incorporate efficient cooling to hold Boston area homes, apartments, and condos. Listen or read more to find out about air conditioning installation in Boston, Massachusetts. 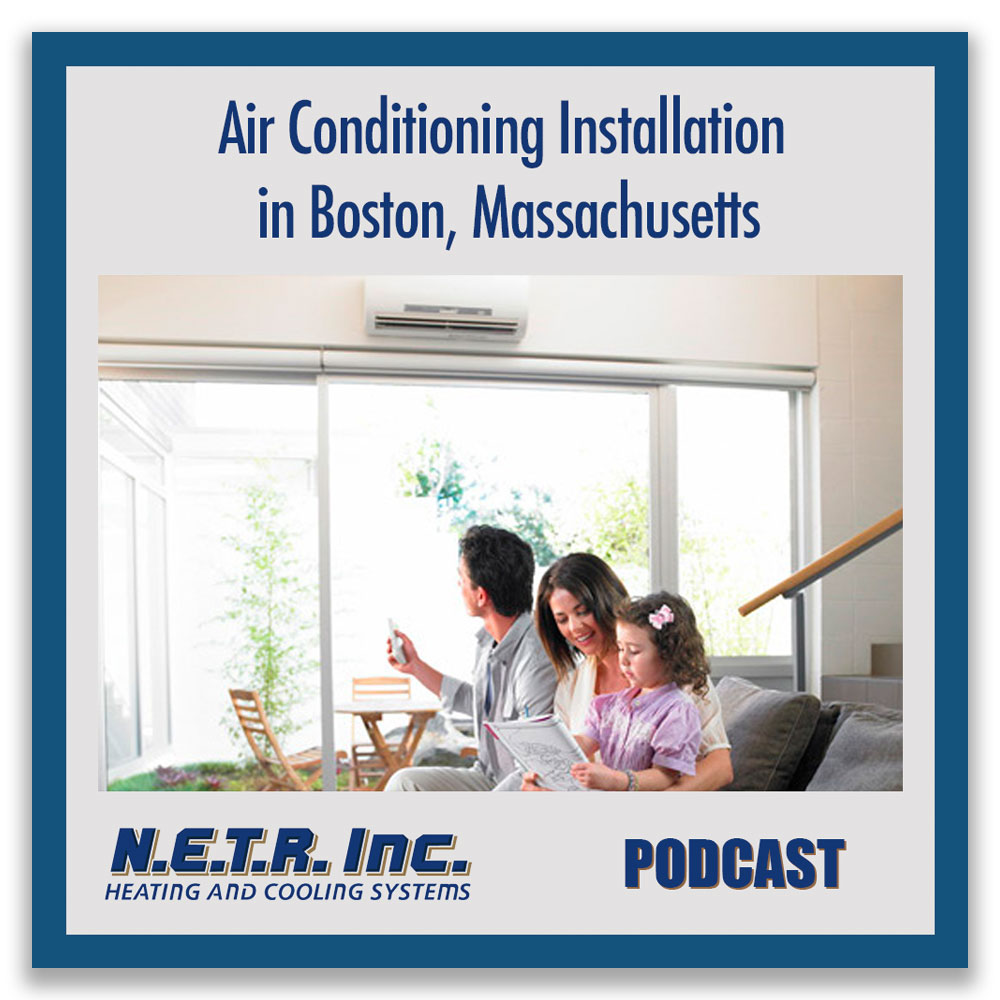 Mike Cappuccio: Good Morning, John. How are you?

John: Good. Mike, what types of air conditioning systems are available for homes in the Boston area?

You have a lot of temperature differences throughout the home when you have that type of a system in there depending on which way the sun is facing and which way it’s coming in the windows and stuff. You can have hot and cold spots throughout the home. Even sometimes they have a two-story condo or something like that in the Boston area where you put that in, and you have one thermostat upstairs or downstairs. You have all these temperature variations when you do something like that.

Mike: That is a ducted system.

John: You would call that central air conditioning?

Mike: Like a central air conditioning ducted system, the most traditional system you see throughout the United States. One of the other ones that we’re seeing becoming very popular now is the high velocity system. The high velocity system doesn’t use as big of ductwork. Basically, there’s a main trunk somewhere that would run around the perimeter, and then there’s these small two or three inch hoses. You actual look up in the ceiling, and you see little round openings about as big as a can of Coke that you’d see in the ceiling. We’re beginning to see more and more of them. A very costly system.

Again, one thermostat controls everything. If they’re not installed properly, we’ve been into homes where we hear they’re very loud. They whistle, things like that where you see that. Again, you have the traditional air handle that needs to go in a closet or in an attic, and there is ductwork involved in that to put that in.

Then there’s the other system that we sell is the ductless air conditioning system from Mitsubishi Electric that we put in, and we don’t need closet space. We don’t need ductwork, and basically, we put more than one thermostat in the home when we install multiple ductless units in the home.

We zone out the home in the Boston area. You may have two bedrooms, a living room, an open area. We maybe go in, put probably most of the time three units and something like that, one in the open area in the front, two in the back in the bedrooms. Way we go each one of those is on a zone, and then we run the piping to the outdoor condensing. Again, no ductwork. You’re eliminating the space that you need for the ducts. You can raise your ceilings up whatever you want to do with that and also putting each room on its own thermostatic control. You’re not using one bedroom. You can shut that unit off. Now, you’re running on two units and gaining efficiency like that to use our system.

John: Do you normally recommend the ductless system for air conditioning in Boston for the reasons that you just said — that you can set up these different zones and control different areas of the house?

Mike: Yes. We go into a lot of homes in Boston, John, and they’re using window units now 60%, 70% of the time. Sometimes they have ductwork in there, and they’re doing a remodel, and they’ve just come to the conclusion that there’s ductwork and there’s air handlers taking up too much living space. A lot of these homes, they’re not that big. They’re only sometimes 1,200 square feet, 1,500 square feet. You’re trying to put a four foot by four foot closet in an area to keep the air handler in, and it just takes up all that space.

Most times they want a closet versus a place where they can put their air conditioning unit, so that’s why we go with the ductless units because we can heat. We can cool. We can zone out. We don’t need space. We don’t need all that space for the ductwork. The unit outside is a lot quieter than the other units that we use, and away we go.

John: Talk a little bit about the different types of houses and apartments that you encounter in different areas in and around Boston and how that affects your installation of ductless air conditioning and heating units.

Mike: Great question, John. Let’s talk about South Boston a little bit. South Boston’s an old part of Boston. It’s as old as Downtown Boston, but you have a lot of old three family homes back in the 1900s that are now being all converted to condominiums. Nine times out of 10, they’re three to four story buildings. They’re wood structured buildings. Sometimes they have a walkway between each house. Most times they’re touching each other, but they’re wood structured buildings, first floor, second floor, third floor.

A lot of them in the back have decks in the back. Ninety percent of them are flat roofs up on there, so we can put the condensing units up on the roof of the building, or first floor we put the unit on the ground out back, and we run piping throughout the home. On something like that, you would take piping on the first floor, run it down into the basement, run it to the back of the home, get it tied in that way. Put the drains into the basement.

Second floor is the one that gives us a little bit of a challenge, but most times we can get from the second floor to the roof or to the back deck possibly with piping to get our refrigerant lines out to the condenser. Then the third floor one is basically — we mount the units and put the units on the roof of the building or on a back deck and bring all our refrigerant piping and drains and stuff to the roof or up to a roof deck or something like that.

Then you’ve got the traditional Boston. You get into Commonwealth Ave., Beacon Street. Your homes like that, that’s your typical Boston brownstone brick type home. Those can be anywhere from one story with a basement up to six stories. Those are the ones that present a little bit of a challenge. The top floor, the bottom floor is relatively easy to do.

It’s the floors in-between where we sometimes need the condominium people’s acceptance to run piping possibly up through a main hallway, up through a chase, possibly on the back of the building over the walls of someone else’s condo on the outside. We find sometimes when we meet with the condominium associations, we can get these things passed. There’s gutters that run down the sides of those buildings. Sometimes we run our piping on the sides of the gutters.

A little bit harder to do a brownstone than a wooden type home because the brownstones are all brick. They’re usually about a foot of brick on the exterior walls. Each home touches each other. When you look at the Boston brownstone, sometimes you think that a Boston brownstone can — you size it by square footage, and it’s not that because you don’t have four exterior walls. You only have two. Most times those only need about half of the air conditioning that you think they really need. We see a lot of oversize situations in those types of homes.

Now, then you’ve got the other types of homes in Boston where you get into Jamaica Plain area, Roslindale area, Arlington, Somerville, Medford places like that, a little bit on the outskirts. A lot of those are your big old Victorian homes, Latin plaster on the walls insides. Most of those homes don’t have insulation in the exterior walls, big old rock foundations where we’ve got to get piping down into the basement.

Those are a challenge, but we’ve done many of them. They’re great to zone out. Sometimes those houses have 4 or 5 bedrooms in them, and those end up being 6, 8, 10 zone units sometimes and what we see in those homes. Those are challenging as well just because the type of construction, very old construction, old walls when you’re drilling those walls and you’ve got sometimes half inch of plaster. Then you’ve got lat board in there.

Then you’re going to the outside. You’ve also got to be careful with a lot of those homes because a lot of those homes back in the day the exteriors were asbestos. You’ve got to make sure there’s no asbestos when you’re drilling that and stuff like that. Every one of them presents its own challenge, but we’ve done every type of home like that. It’s just how you attack that home and what’s different about it.

John: In all of those situations, basically, you’re trying to put that outdoor unit as close to that apartment or condo, say if it’s a multi-unit home, as possible so that you can minimize the amount of ductwork that you need in order to get into that apartment?

Mike: Yes. That’s the piping. We’re trying to get the piping from the indoor units to the outdoor units. In some cases, we only have 80 feet from an indoor unit to an outdoor unit, but when we get into our bigger systems, probably more over three to four zone units, we can put what’s called a branch box inside the unit. Then we have a lot more amount of pipe that we can go from the branch box to the outdoor unit. I think we can go up to 250 feet from that point to get where we need to get to, but then we only have 80 feet from the branch box in. We have to look at the design when we really go in to do that.

That’s what our contact consultants do when they go out to the home. They’re going to look at that. They’re going to run the load calculation, see what the home needs for air conditioning, do the design, “Hey, where’s the best spot to put a branch box if we need it?”, and move on from there and do a full design and walk you through it. See, “Is this something that you think you’re interested in doing?” “This is how we would do it.” It’s going to be very well detailed of how we’re going to do the job.

John: All right. That’s really great information, Mike. Thanks again for speaking with me today.