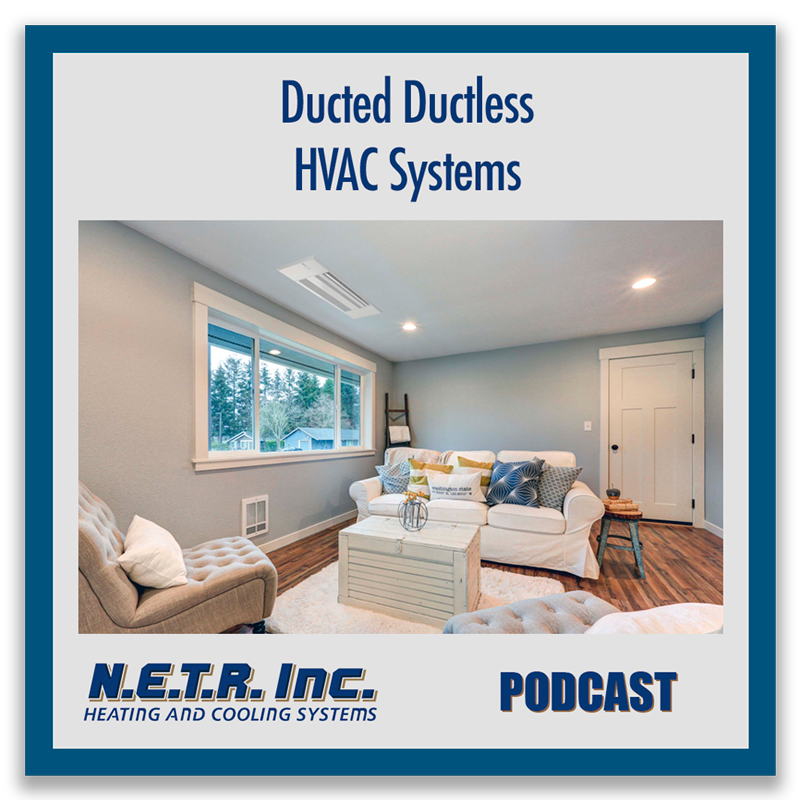 Mike Cappuccio: Good morning, John. How are you?

John: Good. Mike, that sounds like an oxymoron. What is a ducted ductless system for heating and air conditioning? Sound very weird.

Mike: It does sound a little the oxymoron, ducted ductless system. It sounds crazy, but it does exist. You look at it like, what is it? It’s a mixture of two things in the heating and air conditioning system. You have ductless units and ducted units and they can run off of one outdoor unit. If your ducted ductless system — I guess your ducted unit is like a traditional, central air conditioning system that would control one part or one room or however you would want that to be in the home. It’s a typical ducted unit.

It’s an air handler, it’s about three feet tall by 17 inches by 14 inches and it goes in the attic, it can go on a closet and then we have some smaller units too as well, depending on how tight space is. We have some units that are seven inches high by three feet by two feet, they’re a little bit smaller unit they are an ACC unit. The difference between the two types of ducted units that we have is the static pressure. The smaller ones are good for small ductwork runs where we don’t need to put a lot of ductwork on those up in an attic.

The NVCs are a little bit more of a traditional type air and with it has a bigger fan in it that can move more air, get to more spaces, have longer runs of ductwork to do greater sizes of areas in the home and then obviously the ductless system is that warmer unit and we mix and match the two in the home.

How a Ducted Ductless System Works to Heat and Cool

John: Where the ductless system has that outside unit and then an inside unit that’s on the wall, the ducted part of this is that you have a separate air handler that’s running off of that same outdoor unit but then it’s sending the air conditioning or heating to multiple rooms in the house.

Mike: That is correct. What we would do is, we could install this ducted unit in your attic, in your basement. We need to run ductwork to the areas where we’re going to get to — I see a lot of this gets done in a traditional split level or a long ranch or something like that where they might want to do the whole entire home with ductwork and put a ductless unit in the bottom part of the house. There’s definitely cutting, there’s required things that need to be done when we do that. Sometimes we go into one home, they already have ductwork there and we’re replacing the existing air conditioning system with a Mitsubishi ducted unit and hooking that up to a condenser that goes outside.

We’ve done those on one condenser and one indoor unit with the ducted unit. Sometimes it’s not a ducted ductless unit, it’s just a ducted unit because we’ve got much more heating capacity out of our ducted units on our single zone unit, one-on-one. When we go back to the multi-zone we could do example, three bedrooms to the right of the house, kitchen, living room, dining room, on the left side of the house, we can put a little small ducted unit up into the attic, ducted down in put a return in the hallway and put three supplies into those three bedrooms and let those three bedrooms run off that one ducted unit. Now, that becomes one zone, that’s not three zones. That’s only one zone because it only has one return in one area handle that’s controlling that.

When to Install a Ducted Ductless System

John: What are some of the situations where I might want to install a ducted ductless system or use that in part of my home?

Mike: That comes in a play a lot. That’s a great question. You’re in homes, people sometimes just have a great fear of putting something on a wall in a bedroom, they just don’t want to do. This probably one of the main reasons I want a ducted unit, I have attic space that’s where I want to put that but then the other thing is, well, I have to put three of those in and three bedrooms or I could just put one in the attic and we could put holes in the ceiling and come down to those three bedrooms if you want that on one zone, that’s the disadvantage towards it’s going to be on one zone.

John: Now those three bedrooms are all running off of one thermostat.

Mike: One thermostat, one control that’s the contour. The other part of it is that I need some attic space, I’m going to need to put ductwork in the attic. If you’ve got 20 years of Christmas decorations up there, they’re going to have to go because we need some of the space now. That’s got to move out and go put that ductwork in to do that. You can do those three things rooms in one area and then put a ductless unit in the kitchen, living room, dining room, open area.

John: You might have maybe individual units in maybe one in an open area, maybe you want to have a separate individual one in your master bedroom or something like that but then maybe the kids bedrooms you just do one ducted unit and run it off of one zone.

Mike: I’ve seen ducted units. We’ve done three ducted units in the situation like that where they just don’t want anything on the walls and we’ve done three little ducted units in the attic for three separate zones, for three separate bedrooms. Then we’ve done vice versa with one ducted unit to control the master bedroom and the good thing with the ducted the unit one of the pros is that a lot of times people don’t think of is now we can get a ducted into the bathroom. There’s a master bath in there, we can get a little duct run into the master bath to keep that cool. Put the master bedroom on one ducted unit, then take the other two bedrooms and put those on one zone.

John: What are the return vents do?

Mike: The returning vents are removing the warm air from the room on the air conditioning side, and vice versa on the heating side that pulling the cold air out of there. That vent size is probably going to be on the smaller units for something like that for a bedroom. You probably looking at just a 12 inch by 12 inch flat grill on the ceiling with a little filter in it that’s going to go in the room, then you’re looking at a little eight by eight square grill in each one of those rooms at that point. They look nice on the ceiling be very quiet, they do a lot of them.

Pros and Cons of a Ducted and Ductless Systems

John: Talk a little bit more about the pros and cons of a ducted to ductless system basically is it just that you end up with less zones and you have multiple rooms that are on one zone, now you get less control over it?

The other thing is, again, is the ductwork. We’ve got to put ductwork somewhere, whether it’s in the basement, that we’re going to need to have space to achieve what we’re trying to do or vice versa in the attic. We’re going to need space to put ductwork in the attic. You do have an air handler in the attic, that it can generate a little bit of noise. It’s not that loud but you can here maybe come on and come off at nighttime. You can hear those things happen with. That it’s pretty much about it as far as the cons go on it.

John: Then pros just is it a little less expensive rather than installing units in every single room of the house?

John: Really the only advantage would just be if you just don’t want to have a unit on your wall, that’s it?

Mike: It’s preference. It’s how you want things done in your home and how you live but the ducted units definitely do add a little bit of cost versus a wall-mounted unit.

John: All right. That’s really great information, Mike, thanks again for speaking with me today.