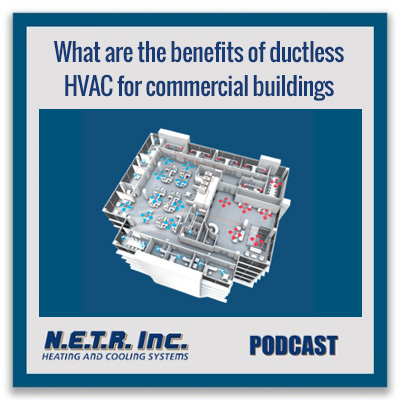 Mike Cappuccio: Good morning John. How are you?

How does ductless work for commercial buildings?

John: Good. Mike how does ductless work for commercial buildings?

They’re dying out there and you go back to the summer time. I’ve been in commercial buildings where I’ve walked around on a 90-degree day and seen people with space heaters under their desks running with electric resistance heat, running at that point in time because they’re just not comfortable. With the ductless system for a commercial building, we would take that perimeter area and put a separate system in each one of those offices giving them the ability to heat or cool at any point in time of the year.

With the Mitsubishi City Multi-system or even some of the some of the smaller systems too, we put in what’s called a three pipe system, versus a two pipe system. Traditionally air conditioning system has two pipes. The simultaneous heat and cool systems have three pipes. So what that allows the system to do, is heat or cool at any time of the year. Someone could be heating an office, someone could be cooling an office. Great temperature control for everyone in the whole entire building.

John: How many different zones do you sometimes have in a commercial space?

Mike: Oh God John I’ve seen anywhere from four to five up to 400 to 500 depending on how big the building is. I mean typical systems I see anywhere from 20 to 30 different zones in a building. It all depends on how the building lays out and who wants to be what and what temperature.

What benefits are there to choosing commercial ductless versus other systems?

John: Talk a little bit more about some of the benefits of choosing a commercial ductless system versus other types of heating and cooling systems.

Mike: Oh God when you get into that the Mitsubishi City Multi- type products or even smaller S-Series products with, you know multiple zones in different areas, everyone is just so much more happy. They all have their own temperature. I mean most people when they’re in an office, the one of the biggest complaints, is it’s either always cold in my office or it’s always hot in my office.

When you go with this type of system, you basically you give the people command over their own temperature in their own office to operate that system. Some of the other systems, like again you have the ductwork, you have one vent in your office and that’s being controlled by the thermostat out in the common area. It becomes, what we call it in our industry is the thermostat war.

John: I’ve been in that situation certainly where you know the boss is always hot, so he’s constantly putting on air conditioning. Then the girl a few offices down the hallway is sitting there with a shawl over her shoulders in the middle of the summer.

Mike: I can’t tell you how many buildings I’ve walked into and I see that. I see it all the time. Just you go into places and they’re like, we just want to be comfortable. How can we achieve this? Well you achieve that by a Mitsubishi City Multi-system or an S-Series system where you can have multiple zones. Again they do make the two pipe system too.

What I mean by that is, a lot of commercial buildings you go into pretty much after October 15th there’s no more air conditioning, the air conditioning gets shut off and then they go to what’s called heat mode.

John: It’s either heating or cold.

Mike: Yes, and that’s a traditional heat pump. That’s either; we’re all on the heating mode now because we’ve done the season changeover or all in the cooling mode at that point. Now in the heating mode you don’t have people putting on electric heaters and stuff like that, you don’t have people turning on the air conditioning in the winter time and stuff like that.

John: The reason for this is because you have one outdoor unit that’s running everything, but then on the inside you have different air handlers for each of those multiple units.

Mike: In a lot of those small offices you can do a ceiling cassette unit versus a wall mount unit. You could even put a little ducted unit above the ceiling, you could possibly do two offices and put those on one thermostat. That could be a conference room or something like that. You got to think of this too, because in a commercial setting, example the conference room.

This is what I always see as the true advantage of a three-pipe system or even a single system in a conference room. You get 10, 15 people in a conference room, you have a meeting for an hour, you know each body throws off 600 btu’s of heat. I mean you get 10, 15 people in there. There’s 6,000 to 10,000 btu’s of heat in a small area, that’s like turning the heat on. I mean and you’ve got the heat on at the same time in the room, the room gets extremely hot.

What do we do now? Now we usually want to put on the air conditioning in that room because it’s hot from the people. Happens a lot in churches too. The churches in the winter time, Christmas time, you get 300, 400, 500 people in a church in the middle of winter it gets hot real quick. Those bodies are giving off heat they’re like a small heater. You want to be able– that’s why I always say the advantage of the three-pipe system is you can have whatever temperature you want, whenever you want, whatever time of year it is. You can do heating, cooling whatever you want to do in that space.

John: You can be cooling off that conference room that has 10 people in it, while you’re still heating.

Mike: You’re still heating the open area for the people that are in the other side. That’s the best advantages that. If you want to turn a zone off if you know you have three or four offices where the people travel or they’re out on the road a lot during the day. Why are you going to heat and cool those offices? Turn them off.

With the traditional ductless system those units are heating and cooling those offices when there’s no one in there. And they don’t have a thermostat and they usually just turn them off, shut the door and call it a day. Put them put them back on when they come in. You can put them on a building management system when the people aren’t there, I mean I’ve even seen motion sensors in rooms where they actually sense motion when people come in, it knows that they’re there and it turns the temperature on.

When they leave the office it actually sets the temperature back on some of these systems. So you’re not utilizing a lot of energy in those offices when people aren’t there, they’re sensing the human body.

How is commercial ductless installed to minimize disruption in a business?

John: That’s a great idea. How is commercial ductless installed to minimize disruption to the business? Obviously, people want to keep their business running and they don’t want to have to shut down for a week in order for you to come in and install the system. How do you deal with that?

Mike: A lot of the times that piping is getting done on the roof and coming down into the spaces where we’d be working, we would pretty much be working at one office at a time or one area at a time channeling the piping to the hallways and then bringing it out to the areas where we would be. We would only be removing maybe one or two or three or four ceiling tiles at a time. Where with the traditional ducted system you’re up there and you’re putting in ductwork, you’re banging metal, you’ve got noise going on.

You get dust and dirt drop and out of multiple parts of the ceiling where we’re working. Most of the time we’re working in a confined area where we’re going to be installing one unit at that time. Get that one installed and then move on to the next spot. Not with a whole big area opened up to put in these big pieces of ductwork.

John: It’s easy enough to just say, okay for the next couple of hours you two are just going to work in those other space and then you’ll be able to go back and then you move a couple of other people. It only disrupts a couple of people.

Mike: It’s usually half a day worth of time would probably be working in that space to do a sealing cassette or a wall mount unit, something like that in that area. But we’re not disrupting the whole entire office space at that time.

John: All right that’s really great. Great information Mike, thanks again for speaking with me today.