Mike Cappuccio from N.E.T.R. Inc. discusses several different types of rebates that are available for the installation of ductless heating and cooling systems in Massachusetts.

UPDATE: Since we recorded this video, we have received new information on the 2019 Massachusetts Ductless Rebates, including the fact that the Mass CEC rebates will be ending March 20. Click here to learn more about the available 2019 Rebates.

Hi, my name is Mike Cappuccio and I want to share some questions that I get asked a lot when I’m in a home. One of the questions I get asked frequently is, “Hey Mike, are there rebates when I install a ductless heating and cooling system from Mitsubishi Electric in my home?” My response to that is “sometimes”. It all depends on where you live and who you buy your electricity from.

For example, in a lot of smaller towns, you might pay your electric bill to a municipality. If you’re paying your electric bill to a town, I’m not positive on how those rebates work because there’s such individual towns, you would have to check with them. Most times it’s a lot different than when we deal with the big conglomerates. Example, if you’re in Massachusetts and you buy your electricity from a National Grid, an NStar, an Eversource, there are rebates available for installing these systems, and sometimes they’re very generous rebates and we’ve got to look at those when we go in to design your home, and see what works for you with your rebates.

The rebates come from two to three different places at times, and let me explain to you where they come from. The first one, the biggest one, usually comes from the Mass Clean-Air Energy Council, that’s called MassCEC is what you’re going to see. That rebate is usually the biggest rebate based on all of them. It’s based on SEER rating, it’s based on EER, it’s based on a lot of different things, and they’re based on the type of system that you’re going to put into your home. I’ve seen those rebates average anywhere from $500 to $2,500 depending on what system you’re putting in your house. That’s something we would look at when designing a system.

Now, when you’ve got to go apply for those rebates, how does that happen? When we install your system we take care of all of your rebate paperwork for you. All of your MassCEC paperwork, we handle that, we file that claim for you. The only thing you need to give us is your electric utility bill and you would have to have a Mass Save energy audit done, and we would need the date of that. From there, we would file that claim — that takes about anywhere from 10 to 12 weeks to get that rebate.

The second rebate from the Mass Save, we would file that paperwork in the office here for you. We would have a copy of that, but we would fill all of that out for you, get it ready to go. On the day of the installation, the installers would then give you the final form that you need to sign and we’ll have the self-addressed stamp envelope that you just take that, put that form in, and mail that off. That’s going to require your signature.

Then the manufacturer’s rebates, if there are any going on at that point in time there would be a form that would just need to be signed off on the day of installation, and that would come back to the office, and that’s an instant rebate that would come right off the price of the job. When you’re looking at installing one of these ductless heating and cooling systems you’ve got to look at these rebates and that’s something we’ll bring up in an in-home consultation. Which rebate might fit with the best system and how it works in your needs for what we’re trying to accomplish. 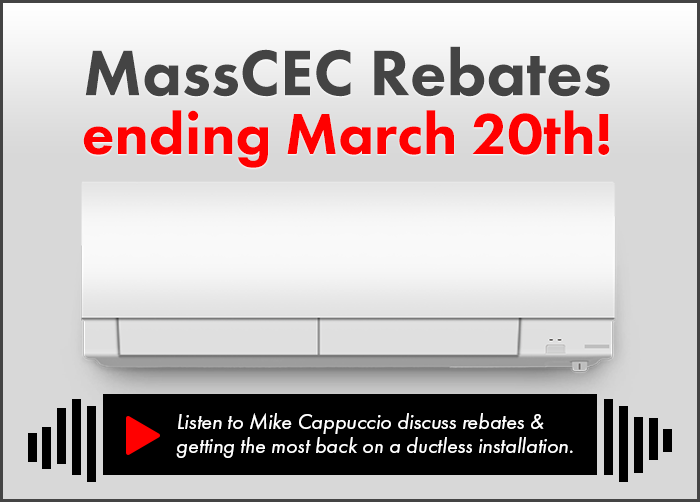