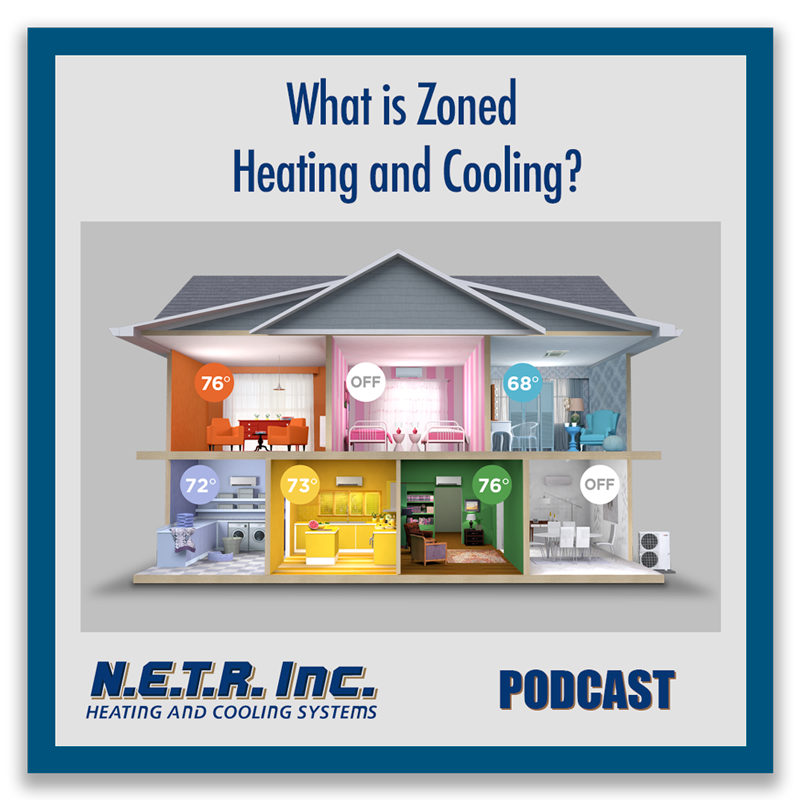 Mike Cappuccio: Morning, John, how are you?

What exactly is zoned heating and cooling?

John: Good. Mike, tell me what is zoned heating and cooling?

Mike: Well, zoned heating and cooling is basically when you take a portion of a home and you start to break it up. Examples: bedrooms, living rooms, dining rooms, kitchens, sun rooms, basements. Parts of the home where you want to have different temperatures in those homes or different thermostats in those different parts of the home or in those areas. We would break up the home to different segments of where we would heat and cool.

What are the benefits of zones?

John: What is the benefit of zoning your house for heating and cooling?

John: Maybe you have a college student who’s away at college for the whole semester or something like that, and his bedroom is not being used. Just shut off the heat or the cooling to that room.

Mike: Yes, we see a lot of people require different temperatures. People want to be comfortable in their homes today, they don’t just want one thermostat. Typical homes would usually get zoned with one thermostat for the whole entire home and you have cold rooms at the end of a home and hot rooms in the middle of the home. With our system, that allows you to really zone out the home nice and have the perfect temperature wherever you want in that home or even have the ability to turn that off if you want to.

Can zoning work if I have a ducted system?

John: You do a lot of work with ductless heating and cooling systems, can you zone a house with a traditional ducted system?

Mike: You can, but it isn’t as beneficial doing it with a ductless system because when you do zone with a traditional ducted system, you’re doing that by dampers. You’re putting dampers in the duct work and you’re basically opening and closing a damper in that room. Now, what happens when you do that is that air now can’t come out of that duct so it needs to go somewhere else, so it’s going to blow hotter and faster and louder in another room.

If you can’t turn down the fan speeds with that unit, you really need to have the right type of system to do zoning. With that, you’d have to put in bypass dampers in that duct work. It can be done, but it’s not as accurate from a temperature standpoint when you use a ductless system. Because you basically have your own air conditioning coil in that room that you’re turning on and off that refrigerant is running through, not just air coming out of the vent.

John: Like you said, you have to really spend a lot of time trying to balance it out because if you’re shutting off some zones, then it’s greater in the other zones. It’s a lot of balance and control and trying to regulate that and change that, say, somebody wants more heat in their room so they open up their duct more. Then, later they change their mind and they want to close that off. Now, can they even do that themselves or do they have to have you come in and make changes to the system?

Mike: A lot of times we’re coming in, we’re changing ducts, changing dampers, balancing things out. It’s very hard to do. There are systems that do do it, but none of them are perfect, none of them just seem to really work real well when you want to zone out a system.

A lot of times with a traditional system, most people, they’ll put a unit in the attic of a home and they’ll have a first and second floor. Or they’ll put it in the basement and they’ll try and force air in so the second floor will be a zone, and the first floor will be a zone. They’re really not zoning out multiple zones in the home, they’re doing two zones and it just doesn’t really work well most of the time.

Mike: No, it’s not each individual bedroom. It can be, but the temperature is just so precise with a ductless system versus just an air vent.

How does ductless HVAC offer zoned heating and cooling?

John: Talk a little bit more about that, how does ductless HVAC offer zoned heating and cooling?

Mike: We basically come in and we cut the home up. We take a look at the home and we say there’s four bedrooms in here, there’s a kitchen, living room, dining room that might be open to each other. There’s five zones. There’s four bedrooms plus an open area could be its own zone. A den or TV room would be its own zone and what we would do is, we would go in and install multiple ductless heads or what we call air handling units in each space.

Each one of those starts to run out at 12,000 BTUs for the spaces that we need, but as those rooms cool off or heat up depending on what you’re doing with it, the unit actually starts to see the temperature in the room, it says, “Wait a minute, I’m getting within 4° of the set point.” Example, you’re set for 70°, at 74° it starts to see that the room is getting cool and it starts to close off a valve in the outdoor unit that says, “Hey, don’t let as much refrigerant run through this indoor unit coil and slow down the compressor.”

Basically, what it’s doing is it’s just giving you the cooling that you need for that room. Another example, as the sun goes over a house, you might have the sun shining in a window in this room right now and it might need the full 12,000 BTUs because the heat load coming in. As the sun gets over the house, it might only need six so the unit, it cools down. It says, “I only need 6,000 BTUs over here.” It switches the refrigerant around to the zones of where it’s going to need it to what’s going to happen in that house.

You want to turn one of those zones off if no one is in the room, you can turn the zone off too. Shut it down, move it around. You’re always moving the temperatures around in the home for what’s happening outside with the environment too as well.

John: Is that always your recommendation to have every bedroom or every space in the house have it’s own zone? Is that really the best way to set up a ductless system?

John: You’re still going to have those temperature wars like you said.

Mike: You do a little bit. Certain people that like it 72, that’s all right, but now you’ve got to remember, those three bedrooms now have become one zone. They’re not three separate zones, they’re one zone at that point.

John: All right, that’s really great information, Mike. Thanks again for speaking with me today.