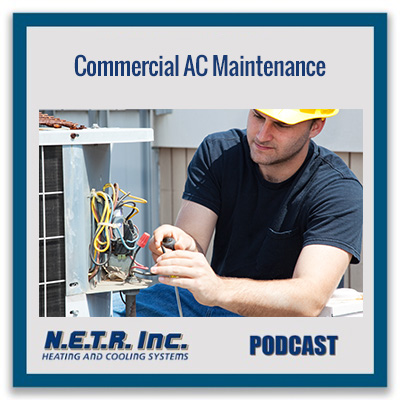 Mike Cappuccio: Good afternoon, John. How are you?

How Often Do Commercial AC and HVAC Systems Need Maintenance?

John: Good. Thanks. Mike, do commercial AC units require regular maintenance in order for them to work properly?

Mike: Yes, they do John. If you look at your AC system in your building or in your home it’s very similar to your automobile and changing your oil and checking your tire pressure and making sure your wipers and things work. It’s very similar like that with your air conditioning and heating system too, you should maintain it on a regular basis.

John: So how often? Is it once a year or a couple of times a year?

Mike: Well, I mean it, really in a residential setting, in a commercial setting, is a little bit different. I would say from a residential standpoint when you’re home, usually spring and fall is when you have someone come out and check your air conditioning system, do the maintenance on the system, make sure that everything is ready to go for the air conditioning season, do everything that you need to do to get that system ready for the air conditioning season. And then with the heating, same thing, you basically go through and make sure that everything is going to run properly when you do flip that heat on, on the first cold night. So spring and fall on the residential side.

Commercially, it’s a little bit different because you do have a lot of people in an area. And we recommend with commercial HPAC, that it’s four times a year, basically at the beginning of every season. With that, it’s more like there’s two major inspections, like with residential, there’s one in the spring and one in the fall, and then in between that, in the off months or the off periods, that’s more or less just when you’re doing your filter changes. So you’re doing a filter change in the fall, and you’re doing a filter change during the summer months. You’re just coming out and doing the filter. So you do it in four visits is what we would recommend

Mike: That is correct, yes.

John: What else is typically involved in maintaining a commercial AC unit, especially when you’re coming out and you’re doing the big ones in the spring and the fall? What’s involved in those visits?

Mike: Well in the big ones in the spring, what you’re doing is you’re coming out, we have a tasking list that we would go through to do that, but the big thing is the spring is you’re cleaning the condenser coils with a power washer or some type of warm water and a coil cleaning solution to get all the dirt and pollen and everything out of the condenser coils so the system will run properly. Cleaning the evaporator coils as well, making sure the evaporator drain lines are clean and clear so there’s not all sludge in them and you’re going to have water dripping in your building. Checking your economizer, making sure that that is opening and closing to bring fresh air into the building. Replacing the belts as well, most commercial AC systems do have belts on there that drive the evaporator fan drive motors, so belts would get replaced once or twice a year, most of the time spring and fall on that major maintenance, and just an overall check of your charge, make sure that there’s enough refrigerant in there to have the system cool for the air conditioning season.

And then in the heating season, you want to go in and make sure that the burners are clean and that they’re burning properly and that there’s no cracks or any holes or anything like that in the heat exchanger that could cause any carbon monoxide inside of the building. So that the two major PMs that are done are the spring and fall. And then, like I said before, in the summertime, come out, change the filters too, obviously, both, all of these four visits filters get changed as well, but those filters would get changed on the two minors. So two majors, two minors. Majors probably take a couple hours on each unit to do. And a minor would probably take an hour to 45 minutes for each unit to do.

John: Okay. And we’re up here in New England and I grew up with that old adage, if it ain’t broke, don’t fix it. So how does getting regular maintenance done every quarter on a commercial AC unit, does it really help to keep it from breaking down? And does it cut down on those repair costs over time?

Mike: Yes, it does. John. I’ll give you a couple of examples. Well, first off, if you don’t have us out in the springtime before the air conditioning season happens, usually what happens is the air conditioning system gets turned on for the first time when? The first hot day, correct? So now the air conditioning doesn’t work. So now that’s a service call charge to come out and look at it. It’s not a maintenance call now. Now it’s a service call. So that’s going to cost a little bit more money, because you’re probably going to pay for travel time for us to come out there to look at that, maybe a service call charge, whatever comes along with that charge, but the maintenance still needs to be done at that point in time too. So you’re going to be in a double whammy situation at that point where you’re going to be doing two things at once.

The other thing too is that, example, if you’re low on refrigerant on the unit and you don’t check it for a long period of time, eventually it’s going to be empty versus if I just have to top off the refrigerant and put a little bit of gas in there, might be a pound or two low, that might be, say a $200 repair. If it’s lost 20 pounds of refrigerant, now that might be a thousand dollar repair. So you’re saving money by looking for leaks, things like that that might happen. The other thing too is, do you have to shut down for the day? You’re going to have to let people go home because it’s so hot in the building. Is it a spot where you can’t work now because you don’t have air conditioning and you know, you’re losing productivity at that point in time during the day?

Again, cleaning condenser coils, just from a point of energy savings and not, by doing that, you are probably picking up around 10 to 15%, just in energy savings from the amount of electricity that you are using by having the system run with the proper pressures and not running at an extremely high discharge pressure, which makes the unit draw more amperage and uses more power. So keeping the unit maintained definitely does save you money.

John: So in addition to just making it more efficient overall and saving you money on your bills, like you said, the most important thing is to think about what happens to your business if that unit breaks. And now you’re without heat or air conditioning for some period of time until somebody like yourself can kind of come out and fix it, that cost has to be figured into. It’s not just the cost of the repair, it’s the cost of that downtime as well.

Mike: I mean, an example two, like a broken drain line on the outside of a unit, a broken PVC drain line from the wintertime or whatever, I mean you catch that on a maintenance when you’re out there, that’s a $25 repair when we’re out there doing maintenance versus water leaking in the building and destroying ceiling tiles, everything else that gets wet above there. And most times what we see is something from a small repair during a maintenance, usually ends up going to a larger repair that ends up costing more money later on, either with downtime or damages.