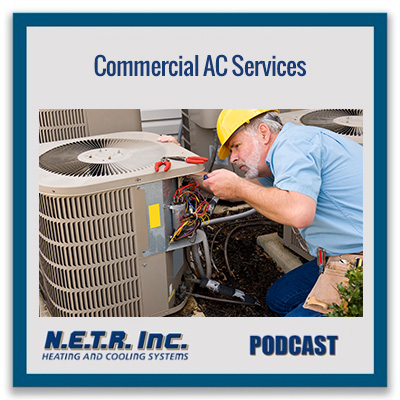 Mike Cappuccio: Good afternoon, John. How are you?

John: Good, thanks. Mike, what are some of the typical commercial AC services that you offer?

Mike: Typical services, John, that we offer, one is maintenance programs and service plans that we do do. Then we have a basic emergency repair service. If something breaks, you have an emergency, we come out. Then there’s plan service where things are planned where we come out and do planned repairs that might be a quote that we issued from a maintenance that we saw. It might have been a little more heavy duty than just an hour’s worth of work that we had to come out and quote to do for you at that point in time. Then there’s replacement work as well that might come from a repair. There’s a variety of different things, how we work our service.

John: We’re going to be talking about maintenance and installation in other episodes of the podcast, so definitely check those out. For now, we’re going to focus on repair and replacement. What happens when my commercial AC unit needs a repair? How do I know, first of all that it does need a repair, and then what happens from there?

Mike: There’s a couple indicators, John. You could be hearing noises down in a building and the senses that you have, hearing, smelling, things like that that you’re going to sense. You could hear something that just doesn’t sound right. It could be a belt squealing on the roof. Sometimes you hear almost like tires screeching.

John: What happens then? I give you guys a call. Are you able to come out right away and see what the problem is? I’ve got a building here and it’s not cooling off. It’s in the middle of the summer, and my workers are all hot. I need you guys out right away. Do I have to wait-

John: Right. Do I need to wait two weeks before you guys come out?

Mike: No. No. Absolutely not. No. What you would do is you would call into us on our line. We have live people here that do answer the phone. You would be put to the service department through a dispatching software. You would get someone out there to come look at the system.

Then we also have the ability to look at the existing repairs that were done on that particular piece of equipment, the age of that equipment, et cetera. A standard new customer, we have to go out, see what’s wrong.

First, we have to gather information: who are the people, who’s the contact, email addresses, et cetera. Who do we see at the site? Are there any special instructions to get on to the roof or is this equipment on the ground? Is it inside? Where is it?

A lot of times there’s accessibility issues when you get to a building and those are questions that weren’t asked prior to going out there. We try and gather as much information as we can before going out there to determine what is it that we’re up against before we go out here and then obviously looking, assessing the situation: is it a no-cool, is it making noise, is the circuit tripped, et cetera. Is there water leaking? There’s a lot of types of different repairs that you might run up against for a first-time call like that.

John: Can you guys work on any brand of AC unit? Is there a preference there?

Mike: We could really work on any brand of air conditioning, John. When you look at an air conditioning system, commercial or residential, they’re pretty much basically all the same. They all operate in the same way. They all have the same functions. One might be a little bit different than another as far as maybe how they might wire something or what type of motor they might use in their particular unit, what type of compressor they might use.

If you look at it from a standpoint of air conditioning, they all do the same thing; they remove the heat from the space and put it outside in the summertime. They all definitely work the same. A compressor has to come on, the fans have to come on, the condenser fans need to come on. They all have a thermostat, most of them. They don’t have a huge difference at that point.

John: What happens when you come out and you look at it, and you maybe will give me an estimate on what it’s going to cost to repair it? It seems like I’m repairing something on this unit every year or every season or something like that. Is it time to maybe replace the whole AC system? How do you help me to determine when it’s time to not repair it and just replace the whole system?

Mike: That’s a great question, John. This question we get asked a lot. The good thing is if you’re a regular customer, we have history. We can see this is what’s been done on this unit the past 10 years.

A lot of it is where it is placed, too. What’s the environment that it’s in? Is it on the ocean? Is it on the ground? Are there trees and leaves all around it that might be falling into it corroding things, stuff like that.
When we look at the repair and the replacement and the dollar value, we try to look at that from a standpoint of, look, if it’s going to cost 15,000 to replace it and it’s going to cost you 7,500 to repair it, at that point in time, if you’re saying I’ve got a 20-year-old unit that I’m spending $7,500 on, it’s half the cost of a new system, there’s one thing you’ve really got to look at right now is that most of the time, that’s probably going to be a compressor that you’re putting into the unit. Your system’s contaminated. It’s almost like you’re changing the heart of an 80-year-old man at this time. You’re changing the heart of the system, is what you’re doing.

You’ve got to look at that cost and say, “I’m going to put $7,500 into a piece of equipment that really, over a period of 20 years you probably depreciated, that is worth nothing.” My recommendation, I wouldn’t put the $7,500 into a 20-year-old unit. Here’s why. You’re going to change the compressor now. That’s going to be this year you’re going to spend $7,500. Now next year, when an evaporator fan motor fails or a condenser fan motor fails or a heat exchanger fails on the heating side, now we’re going to spend another $7,500. Now it’s been two years, and I’ve spent $15,000 on this 20-year-old piece of equipment. Wouldn’t it have been better to change it and spend the $15,000 two years ago, and now, for the next 10 years, I probably wouldn’t have any major repairs. I would just have maintenance and I would be way ahead of the game at that point in time. I still now have a 20-year-old unit that I’ve spent $15,000 on. I’m $15,000 behind at that point.

I don’t recommend, when it gets to be half the cost of a replacement, you’ve got to really sit down and look at that and say, “What is the age and the condition of this piece of equipment?

What Determines Replacement Versus Repair?

Mike: It could be with the age. If you’re looking at the history, if you have the ability to look up history of a piece of equipment and see it’s maybe two condenser fan motors and a refrigerant leak. The compressor’s 20 years. That’s going to be the next thing that you’re going to end up changing. This piece of equipment has a life expectancy.

When you look at residential air conditioning, I like to say 15 to 20 years. I’ve seen some residential air conditioning systems that have been put outside a home that nothing has ever been done on them. I’ve seen homes where I’ve taken out air filters that have been in there from day one, that they’re 15-year-old air filters. Just think about the air filter can only filter so much dirt, so where does that dirt end up? It ends up inside of the evaporator coil, it ends up in the duct work. The system is just gone at that point in time, and it needs to be replaced. You’ve got to be able to really look at the age and the cost. If it’s a minor repair, it’s 300 or $400 and 20-years-old, maybe take a risk on that one.

John: If you have multiple buildings with multiple units or things like that, you don’t want all of them to all fail all at once and have a huge capital expense. Maybe you want to get on a plan where you’re replacing one each year or something like that. You can help customers with planning that out.

At that point, now, I see this so many times, John, is that the compressor goes on the unit. We’ve been talking to a customer about a replacement system for the last two years but now, the compressor goes, and it’s going to cost $7,500 to fix. Now it’s the middle of the summer. He has no air conditioning in the building. He needs the air conditioning to run right now.

The replacement unit might take some time. It might need to have a roof curb put in. It might need to have some additional duct work done. There’s a lot of things that might happen with that that I can’t do right now. It becomes this 9-1-1 emergency repair and you’re spending $7,500 on a piece of equipment that isn’t worth $7,500. I see that happen so many times because of improper planning of what you could have been doing from multiple maintenances from years prior.

Rolling back into the maintenance podcast that if you’re doing a tasking sheet, and you’re out there three or four times a year, you’ve got a pretty good idea of the condition of this piece of equipment at that point in time. That’s why a maintenance program is so key with a service business. You just don’t want to be doing multiple service calls all the time. You want to be doing the replacement work too. You want to be looking at that saying, “This is why I’m doing maintenance, for you to tell me when does this need to be replaced.” A lot of times people will come back at us and say, “How come you never told us that needed to be replaced,” and it’s been on the reports for the last three years but no one’s ever done anything about it either.
It’s not something you think about all the time. You think about it when it breaks. That’s when it’s a big problem at that time. You can prevent a lot of this with proper planning.

John: That’s really great advice, Mike. Thanks again for speaking with me today.