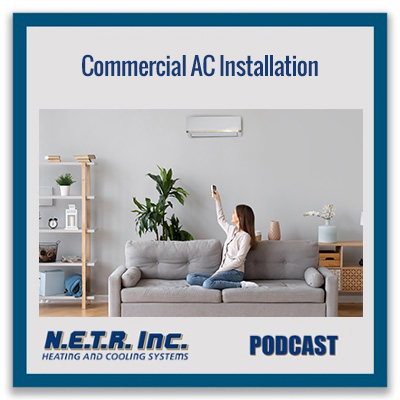 Mike Cappuccio: Good morning, John? How are you?

John: Good, thanks. So Mike, where are commercial AC units typically installed on a commercial building?

Mike: Well, that can be in a lot of places, John. That’s a loaded question. They can be placed on the roof, depending on what type and what way they are going to heat and cool the building. I’m going to say maybe on a commercial building, 70% of the time, they go on the roof. They’re usually what we call, package units, and they would go onto the roof. They would provide heating, cooling, and put duct work down inside the building. Sometimes, they’re on the ground outside. Sometimes, they get placed out. There could be a split-system where we have an indoor unit and an outdoor unit tied with two pipes where the condenser might go on the roof or it could go on the ground. Sometimes, they go in a loading dock area where you might put condensers, things like that. It really depends on the type of installation, but I want to say probably 70% of the time, they do end up going on the roof of the building.

John: Okay. And are there different types of commercial AC systems that are available, and then what are they?

Mike: Oh, yeah. There’s a lot of different types of commercial AC systems today, John. You can do ductless air-conditioning in a commercial building now with a VRF system, you can do package units on a roof, you could do split-systems, you can do just PTAC units that go into a wall possibly, like a hotel-type system. That way, each room has its own little small individual systems. There’s a variety of different ways now that you can heat and cool your buildings as far as different types of systems.

John: Okay. And what are some of the issues that come up when you’re installing a commercial AC system here in Massachusetts?

Mike: Well, there’s a lot that goes on when we’re doing a new installation right now, as far as what needs to happen, what types of permits need to be brought out, what does this roof look like, what is the structure of this building like? Every time now, before you can even put anything on a roof now, you have to have a structural review done of a roof where we have to bring in a structural engineer. If you’re going to be putting a unit on a roof or if you’re even replacing an existing unit on a roof right now, you have to have a structural done to get any type of a permit. Usually, it’s going to be a building permit that needs to be pulled to do a rooftop air-conditioning system.

There’s a lot of different things that you really have to look at when you’re going into a building to do an AC installation. Lot of factors come into play. Again, what type of building is it and what are they trying to do in the building with the air conditioning system?

John: How does that change when you’re doing a replacement of a unit? You mentioned that even when you’re doing a replacement, you might still have to do those structural analysis or structural reviews of the building to make sure it’s okay to put the new unit on there. Are there other issues that might come up when you are replacing an existing unit?

Mike: Yes, there is John because most times, there’s an existing roof curb that we call … That’s the terminology for it, it’s a roof curb that’s basically been cut down into the decking of the roof and it was probably put in there when the building was built and these curves were put in there. Now you’re going to be taking that old unit off of that existing curb that’s up there and you’re putting a new unit on the old curb that’s there. And the curves you have to put, what’s called an adaptor curb, or you have to put a new curb down to the roof. So it all depends on, “Am I going to use an adapter? Am I going to put a new curb in the house?” I’ll also have to take into consideration the weight of that curb. Because now I’m adding more weight to the roof so you do need to have a structural done on that.

You have also got to look at the existing power that’s on the roof. Is that going to be okay for the new unit, are the controls going to be the same that we’re going to run off the same thermostat? So there’s a lot that you really need to look at. Do I need to change the duct work down through that curbing that goes into the roof? Most times you are going to need to change that. So there’s a lot that comes into doing a rooftop replacement system when you’re getting into replacing equipment in a commercial building. Permitting especially, that’s key. You’re going to also need a plumber if you’re doing gas up there too, you’re going to need plumbing permits. You’re going to need a plumber up there, someone has a plumbing license. You have to get a plumbing permit, electrical permit and building permit and a structural review to do that type of work.

Mike: Well, that’s a sizing thing, John. You have to look at the size of the building, run a heat load on the building, see what the manual J-load calculation says that is what you need for that particular space. Most times, you don’t really want to go by what was up there if you’re doing replacement and sometimes, you got to look at that and say, “Was this really the right size, was it oversized, was it too big, was it undersized?” Things like that.

So you run a quick load on it, see, is the duct work okay for what I have, if I’m going to be doing replacement? If I’m doing new, now you have to kind of look at, okay, what am I putting in there and what type of duct work would I want and then what type of system is good for me, what do I want to put in for? Do I want to put heating and cooling with gas heat, how do I want to heat the building? Is it oil, is it gas, is it propane, is it electric? What options do I have that I could use in that building to heat and cool with?

Mike: Yes, they are, John. Yes. There are different types of energy ratings for different rooftop units. Now today in split systems, there’s high efficiency, there’s medium efficiency, there’s low efficiency. I just saw some brand new rebates come out the other day for commercial rooftop units. As far as Mass Save is really involved now on the commercial side whereas about a year ago, they really were not. They’ve made it a lot easier for building owners to get the rebates and how to do those rebates. I’ve seen some new paperwork come out on that as far as how us, as contractors, can help building owners update efficiencies in their buildings to get that done. Efficiency does play a big part of this.

AC Installation Impact to a Business and Timeframes

John: And how do I get an AC installation done with the least amount of impact to my business? It’s not a problem, I guess as much when you’re doing a brand new construction because the business maybe isn’t open yet in that location. Especially if I’m replacing an existing unit, am I going to be down for a period of time and how do I plan that?

Mike: Yeah, that’s a great question, John, because that comes up a lot where, in the middle of the summertime, the rooftop goes down and now it’s got to be replaced. So like I said, that could be just the permitting process alone. And the structural reviews sometimes can take two weeks, three weeks, sometimes a month before you can even get your permits that you need to do this. This is why my planning is so important because if part of this planning was done prior to just, “I just want to get a replacement done,” you can do that in a day sometimes, but if you don’t have everything done prior to that, the unit could be down for a while.

As far as that goes, I’ve seen buildings have to close down because they don’t have any air conditioning at that point. So a split-system could take a couple of days, two, three days to do sometimes inside of a building. But with the least amount of impact is planning. If you can provide proper planning to your business, that you know this is going to be something that you’re going to need to do in the future, the better the planning, the quicker it moves along, it can be done in a day sometimes.

John: All right. That’s really great advice, Mike. Thanks again for speaking with me today.