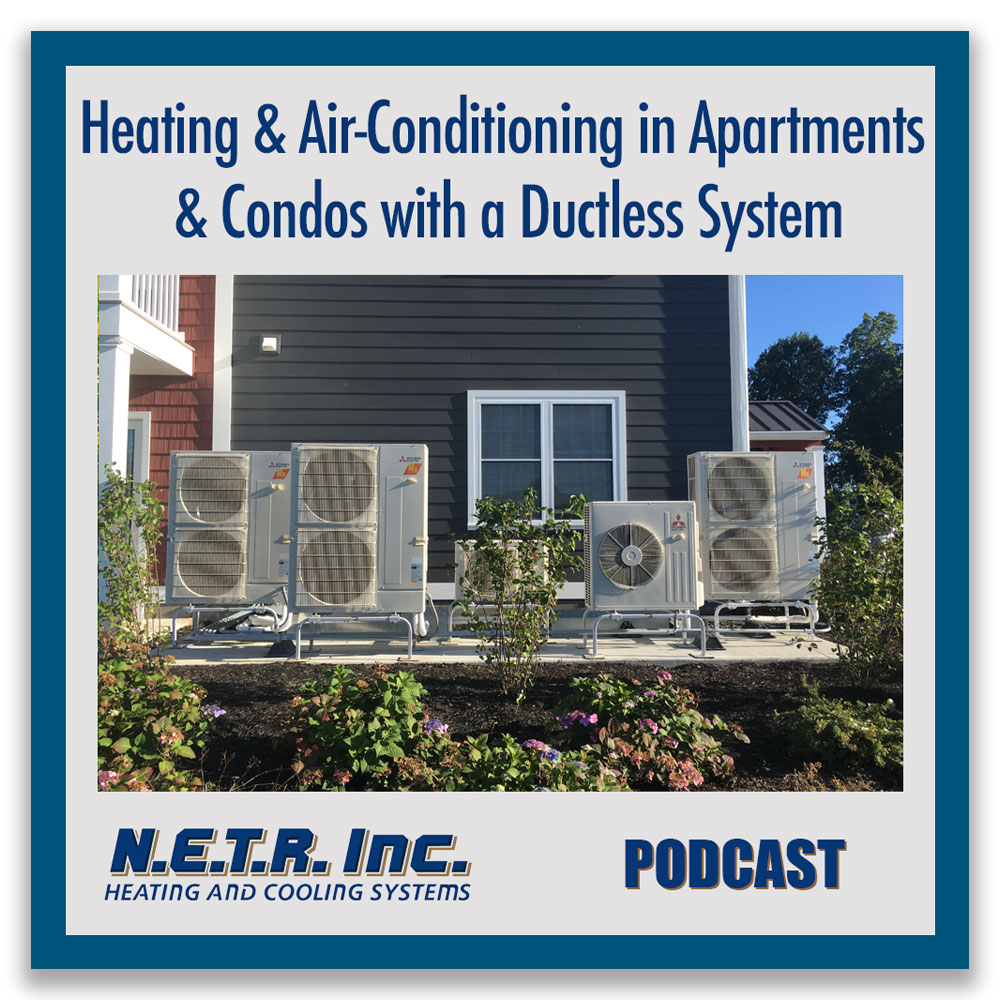 Mike Cappuccio: Good Morning, John. How are you?

John: Good. Mike, can a ductless heating and air conditioning system be used in apartments and condos?

Mike: Absolutely, we do it every day. Every single day we put units in apartments and condos, and a lot of these apartments — they are condos now, that the three family house that was an apartment building at one time is now a condo or it’s still an apartment and the landlord might own it. He might not own it. It could be owned by someone individually but we do those every single day. It’s a good part of our business as a matter of fact.

John: If I’m renting an apartment and we have an old traditional system, is there any way that I could maybe try to convince my landlord to install a ductless system because they sound so great.

The flip side of that is for the heating side, if you can get the tenant, sometimes the tenant, be careful what you wish for because if they can get the ductless system installed, they can heat and cool that apartment by themselves and if you’re paying the electric bill, then we pull the heating system out of there and you’re going to heat with the Mitsubishi. You can heat with that, but now you are going to be paying your heating and cooling costs too. Probably good in the summertime because you are paying a lot of money for air conditioning, but I think from a comfort perspective you’re going to be a lot happier so you might not mind paying for a little bit of that.

John: If you’re energy conscious and maybe you want to turn down your system during the day when you’re not there and things like that. As long as you’re —

Mike: — If you figure out how to use it properly, I think it probably saves some money. Sometimes it’s not all about money, it’s about comfort, too.

Are Ductless HVAC Systems a Good Investment for Property Owners?

John: If I’m the owner of an apartment building, then on the flip side is installing a ductless system in my building for my tenants a good investment?

Mike: Yes. I’ve seen it done a lot of times. One of the main reasons why they do it is because they’ve got a central heating system in there and they’ve got a big old boiler in the basement, might be running off oil or gas and the boiler is getting to be 40 years old, 50 years old — at that point now and they’re going, “What are my options here? I’ve just got heat in this building. I’ve got no way of conditioning. I’ve got tenants putting in window units and they’re really not happy with that and they each have their own electrical service.”

“I can basically get the heating component of what I’m paying if it’s a central heating system and I have to pay for the heat for the tenants” — because sometimes it’s hard to break up four or five apartments onto a heating bill when it’s one gas feed coming into the building on the main house gas. Now, what they do is they go and they put it in a ductless system in the five or six units, and “Mrs. Tenant now the heating and electric, the heating goes onto your electric bill and you’re paying for it now and you’re heating and cooling in that area.”

Landlords Can Save on Heating Bills

John: On the other hand, you would get away from those arguments between tenants where you’re saying, “why am I paying this much for my heat and electricity because I don’t use that much energy whereas I know the neighbor next to me has their heat on at 50 degrees all day long” . . . or something like that.

Mike: One of the things we hear a lot too is, “I live on the fifth floor I never turned my heat on. My apartment is always 85 degrees. I’ve got the windows open.” I don’t know if you’ve ever owned an apartment building or anything like that, John, but I’ve talked to some apartment owners and they get more furious when they pull up to an apartment building on a 20 degree day and they look up on the fourth floor and all the windows are open and the house and the boiler is running downstairs in the basement.

They are like furious to seeing all the heat’s going outside. All the heat that’s rising, you’re letting outside at that point. With a ductless system, you’d never be doing that. They would be paying for it themselves using their own heating and cooling energy. I’d be more conscious as to what I’m doing at that point. I wouldn’t be opening the window. People don’t care, they open the window when they’re not paying for the heat. I know many people that do it. Many, many people that do it. I think it’s a crazy thing. I’ve heard it a lot.

John: Talk about the situation where maybe you have a building that uses an old style heat pump, but that heat pump doesn’t run below a certain temperature. Do you guys come in and install a new system?

Mike: Yes. That’s new technology right now, John. It’s really catching on. Now we have a single zone ducted heat pump. What I mean by that is you’ve got hundreds of thousands of townhouse condominium style homes that had been built in the ’70s and ’80s, and that was when electricity was really cheap and the typical norm for the builder was to put in a heat pump. Put in a heat pump with backup electric heat and that’s how we’re going to heat these condos. We’re not going to bring in gas lines, we’re going to do electric hot water and they saved hundreds of thousands of dollars by not bringing gas into these places and using electricity.

It really didn’t matter to them because they were selling them. I’ve heard instances of people with heat pumps with backup electric heat in a 1,600 square foot condo with electric bills on average is $700, $750 a month in the wintertime and they’re old, they’re inefficient, they’re 30, 40 years old now. Some have been changed out at one point, but that’s still 20 years old and they don’t heat when it gets cold out. After 28 degrees, 30 degrees, the electric heat is coming on and you’ve got the red toasts glowing in the ductwork with the electric backup strips running all day and heating the apartment.

We can do that now with the Mitsubishi p-series, hyper heat, ducted system. We’ve changed out many of them where we go in, we just take out your old air handler, remove the piping and put a new condenser outside and we don’t need backup electric heat for that room. We can run it on the refrigerant through the system. We can put backup heat in there if you want a little bit of it, but we have the ability to lock that out at a certain temperature. We can put a thermostat outside that says, “Hey, don’t come on below or above zero degrees. If it’s zero degrees I don’t want any backup heat on it. If it gets to be five below and I think I might need a little backup electric heat, I can do it.”

The norm is we really don’t put that in. We don’t put the backup heat. We don’t need it. A lot of times too you see these condominiums to where you have the typical townhouse condominium, where you have four stories and a garage and the little basement is on the first floor, second floor is the kitchen, living room. The third floor is usually two bedrooms and the fourth floor is usually a loft of some point. That’s where — those usually become a cooling problem and the summertime they can’t get any cooling up there.

Those are options sometimes for a single zone ductless system where we can put out in the back of the room and kill two birds with one stone, where we’re at your house, fix the high energy bill heating thing and then get your cooling in the summertime. You haven’t lived up there because it’s 90 degrees up there all the time.

Installing a Single Zone HVAC System in a Multi-Unit Condo

John: If I’m in a situation where I own a condo in a multi-condo unit, maybe it’s a three family home or maybe it’s more of an apartment building kind of thing — can I install a ductless heating and cooling system in just my unit and what approvals do I need from maybe a condo association or something like that.

Mike: Those situations become sticky every now and then, but you’ve really got to get — it depends on how much the board pushes things in your association. We have one condo place in Sogo Sta we work with. We’ve probably put in over 100 ductless systems in there. It’s a townhouse application. It’s that set same application that I just told you about in the third floor of loft that’s hot all the time.

They’ve basically got a written approval that they’ve sent to everyone saying, “Hey, we know everyone in this place has this problem, this is what you need to do. We’ve approved this, you can do this.” Then you’ve got the other apartment-type condo things where the homeowner is going to be, go to the board, we’ll present submittals, here’s the equipment sizes, here’s the sound levels, here’s what we’d like to do is the pictures were would like to put everything. Sometimes it gets approved, sometimes it doesn’t. Most of the time I see it get approved though.

I see a lot in the bigger, bigger unit where you might have 200, 300 condos and a 10, 12 storey building where they might not be accessed to the roof with piping, with sometimes they want to put it out on a duct of a building or something like that. They just don’t want anything outside. You can’t have this, you can’t have that — but it really depends on your situation.

We’ll work with the condo board, I’ve been to many condo meetings where I’ve sat down and talked to the associations. I think sometimes once they see what you’re really trying to accomplish and they hear what the problem is and then they find out you know what, there’s more people in this building that have this problem. It’s like, this might be a solution for the whole building. We’ve gone and done whole buildings like that.

John: One person looks into it and get you involved and wants it done and then all of a sudden half the people in the buildings are getting it installed.

Mike: Yes, exactly, it happens all the time.

John: All right, that’s really great information Mike, thanks again for speaking with me.