The Campion Center in Weston, MA is known for being an excellent retirement home for Jesuit priests, as well as an event center. The priests living in the mansion, often host galas, charity events, and fundraisers in the main building, so it is quite well known in the area.

The mansion where the priests reside was an old building, built before central heating and air were standard, and although the steam heating system worked well in the winter, the priests had no way to keep the main level cool during the hot summer months. They had resorted to using window air conditioning units wherever possible on the main floor, to try and battle the heat, but the more centralized rooms in the mansions stayed hot all summer long.

It was time for a change, so they called in Michael Herrick, from N.E.T.R. Inc. to help solve their air conditioning problems.

Problem: The Campion Center home for retired Jesuit priests had no central air conditioning. The residents suffered from hot summers and the high cost of running window ACs in such a large building. 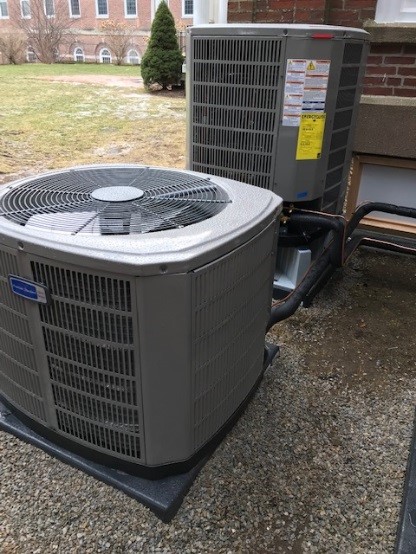 The first thing Mike did when he visited the Campion Center for the initial assessment, was to estimate the BTUs needed for the space they would be cooling. After 30 years of experience working in the heating and cooling industry, he was easily able to give a rough estimate for the job. The mansion was much larger than typical residential homes, which require approximately a two to three-ton system or 36,000 BTUs, whereas this project would need 14.5 tons — a staggering 168,000 BTUs to adequately cool the space.

After the initial assessment, an engineer is sent in to go precise measurements and to map out the design of the ductwork and new units. The engineer considers everything from the exact size of the rooms to the type of glass used in the windows to accurately design a system that will provide lasting relief.

The crew set to work on the project quickly once the plans were laid out. However, due to the age of the building and the presence of the steam piping that wound its way through the walls and ceilings, they had to modify their plans significantly to install the ductwork.

In modern buildings, the materials are standardized, and it is easy to predict what will be found inside the walls once they are cut into to make room for the ducts. Older buildings are more unpredictable, which made this job more intricate than most. Mike and his crew found that the some of the walls and ceilings were plaster and mesh and often when they’d get inside the wall, there would be a steam pipe in the way. 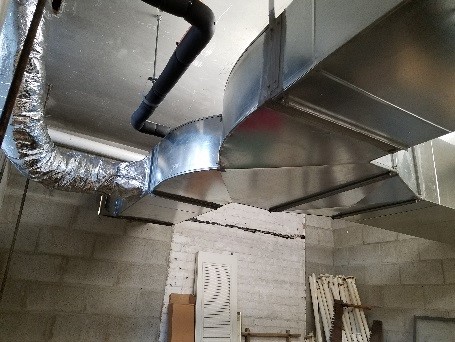 These 3-4” pipes were installed for the steam heat system that heated the entire building during the winter, so they could not remove the pipes to make room for the ducts. Instead, they had to build the ductwork around the existing piping. These changes often required the addition of custom-made ducts to be installed. Some of the fixes were more intricate, requiring the crew to make an offset that would first move the ductwork up and over the pipe and then down on the other side to continue the flow.

All in all, the job was initially estimated to take 200-300 hours of labor to install the new central heating system fully. Due to the age of the building and the need to adapt from the original plans, that time increased to 500 hours, but the crew was able to make all the modifications they needed to the system to cool the building properly. In addition to the three American Standard air conditioning systems, N.E.T.R. set up hot water heating coils alongside the central AC units so that a future upgrade to the current steam heat system would be easy to manage. 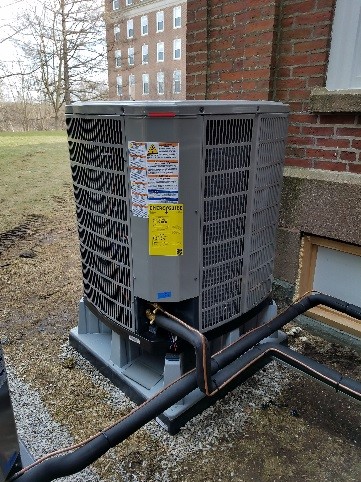 In one of the rooms, N.E.T.R. included an April Air Steam Humidifier to help monitor the humidity level in the room. This room housed the piano, which is very sensitive to drastic changes in the humidity, so the ability to control and adjust that room specifically was a great benefit to the residents. This unit was the only one installed in the Campion Center that includes a heat pump, which is needed to maintain the proper air temperature and humidity in the piano room.

The three other units will replace the window air conditioners that had been used, allow for greater comfort throughout the mansion and even cooling in the centralized rooms that were not able to be cooled before.

The central air conditioning system installed in the Campion Center will be a vast improvement over the window ACs that had been used for years. Now, the inner rooms of the mansion will remain just as comfortable as the rooms with windows. Unlike the window ACs, the American Standard central AC system will be much less expensive to run, even in the hottest months of the year. 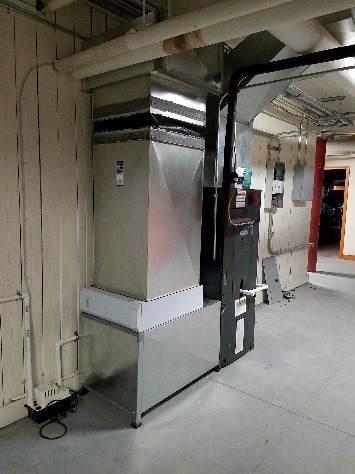 In addition to the savings to the energy bills over the summer, the residents of the mansion will be able to enjoy even cooling throughout the lower level of the center where the dining room, kitchen, study rooms, main living room, TV room, and the pastor’s living quarters were located. The upstairs living quarters were not included in this install but could be upgraded later, if the residents need an additional cooling during the summer.

The variable speed heat pump in the piano room only requires as much energy as a light bulb to run, so they can expect to save a significant amount on energy bills for years to come and protect the integrity of their piano.

Another great benefit to the American Standard central AC system is that it was easy to link to the control system already in place. N.E.T.R. Inc. installed three Wi-Fi wireless thermostats, and the Champion Center hired a controls company 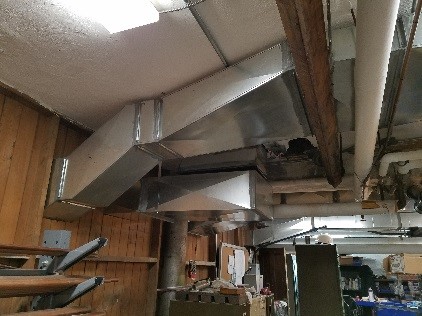 In Need of an Upgrade?

Is your business or home dealing with an outdated heating and cooling system? Do you need relief from expensive repairs and high energy bills? If so, contact N.E.T.R. Inc. today!

Our experts have years of experience in Boston, MA, and the surrounding area. We’ll work side-by-side with you to develop and system that will provide top-of-the-line heating and cooling and reduce your monthly energy bills.

Did you know that environmentally friendly upgrades can qualify for rebates? Ask your N.E.T.R. Inc. specialist how you can be eligible for savings on your new heating and cooling system.