They say there’s always room for improvement. When it comes to HVAC systems in older houses, that’s often the case. That’s not to say this ranch home was ancient, but a lot has changed in the decades since it was built. Our ductless HVAC tech was here to help them move their climate control into the 21st century. 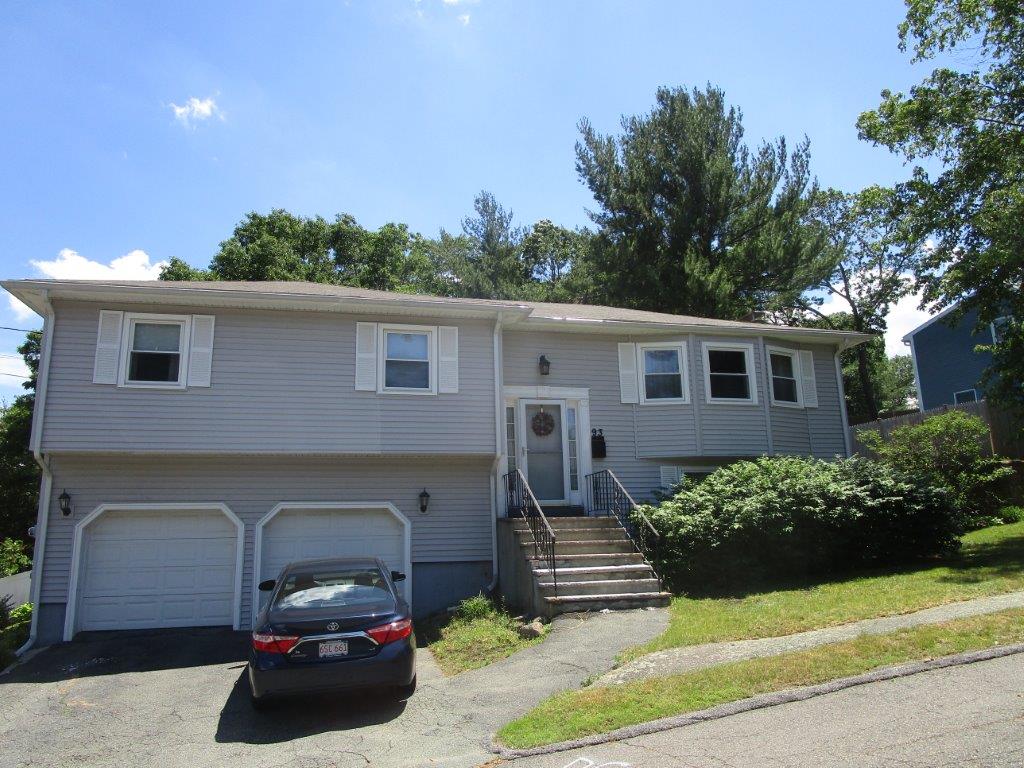 A New Solution to an Old Problem

This ranch home had a common problem: The living room needed a better air conditioning set up. It just wasn’t staying cool enough. A lot of times, you hear about this happening in the bedrooms. But with a design like this, it can happen in the living area too.

The reason has to do with a basic idea: Heat rises. That’s why the top floor of a home is usually hotter than others in the summer.

In the case of this ranch, the living room was technically on the top floor. Like many ranches, this one is a one-story home. But, that story is raised a little from the ground. That makes a difference.

Specifically, the living room is above the finished basement, which is usually the coolest part of the house. That means the warm air moves upwards toward the living room.

Way back when, you would remedy this with a window-mounted air conditioner. You could buy one for relatively cheap. At least, it would be less expensive than re-doing your ductwork.

However, there are some serious drawbacks to window units. For starters, they’re really noisy. Putting one in a living room means you might drown out the television or people talking.

They’re also unsightly and a bit of a pain to lug out, clean off and install every summer. Additionally, they’re inefficient, driving up energy bills.

Ductless Air Conditioning: A Better Way to Cool Off

The latest and greatest in home air conditioning is a mini split AC.. And, that’s no load of hot air. Using a ductless system gets you cooler with less hassle and even less noise.

Ductless air conditioning uses units that mount on your wall. They’re a few feet wide and about a foot thick. All in all, they don’t draw a lot of attention. You’ve probably been around them in restaurants or people’s homes and not even noticed them. 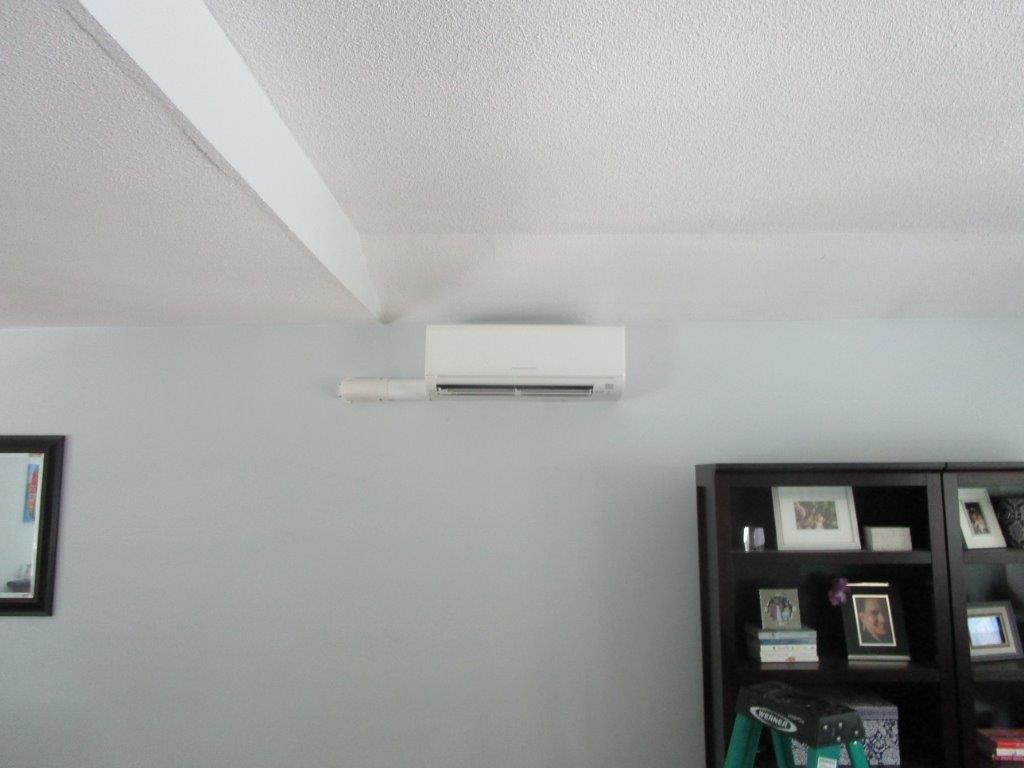 The point is, they don’t take up a lot of room. You don’t need to carve out part of your wall to mount it, nor will you block a window to put it up in the summertime.

This works because the a/c condenser sits outside, like a central air system. In fact, a ductless mini split air conditioner can treat a whole home with multiple units. Or, you can use just one unit for a specific area.

In this case, our homeowner only wanted to treat a single room. So, we worked out a system that fit her needs exactly. That unit connects to the outdoor condenser thanks to a tiny, flexible tube out of sight behind the unit.

However, that little tube and the simple system do a lot. For starters, it delivers just as much, or more, cool air than older window units. And, it does so virtually silently. That’s another big advantage over other air conditioning systems. 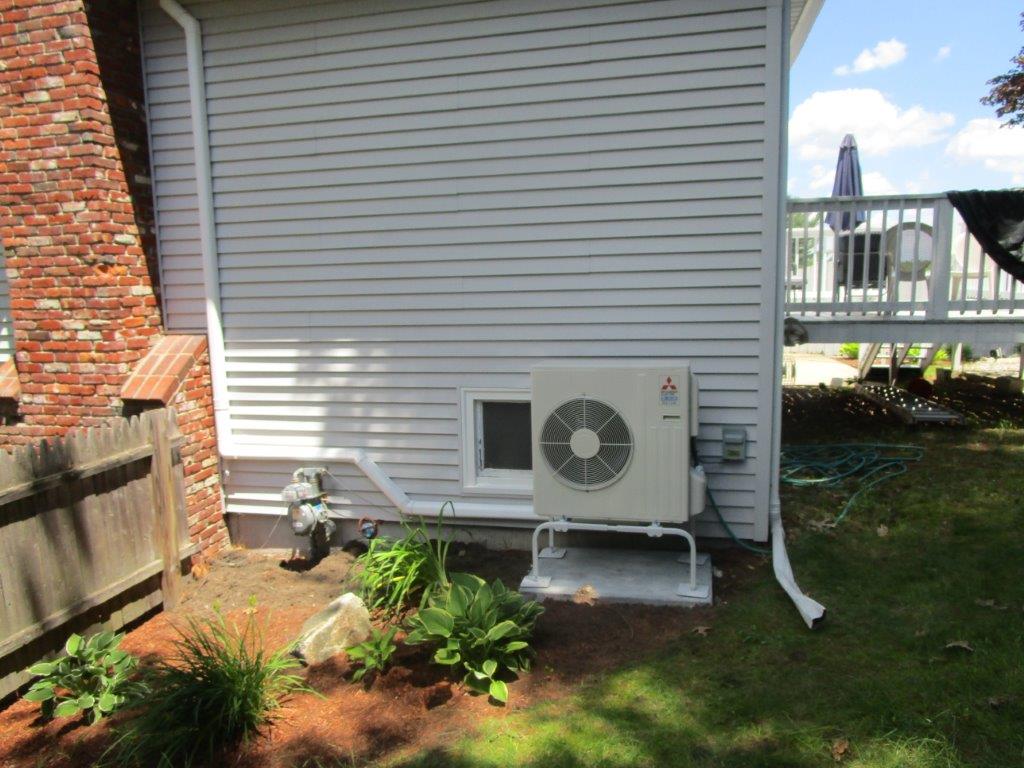 The cost of ductless is a final factor. That’s especially so for anyone who’s used a portable AC or window unit. Those people know just how high your electric bill can go with even just one of those in your house.

Of course, central air is more efficient than a window unit overall, but, there’s the cost and hassle of getting new ductwork put in to consider. That’s on top of the cost of the condenser. Now, you’re paying to cool the entire house. That’s more energy — and more money — for a bigger job than you need.

That’s the beauty of ductless HVAC systems. They’re as large or small as you want them to be. In this case, a mini split AC fits the bill perfectly. It works just as well as larger units, but on a smaller scale.

They’re installed without the cost and hassle of building or modifying ducts and vents and as a result, they’re priced right at any size.

Once they’re running, they’ll cost you less over time. Units like these Mitsubishi ones are Energy Star-certified. That means they meet government standards for high efficiency. This indicates they use less energy than comparable products without that certification. Less energy means less money you pay each month in energy bills.