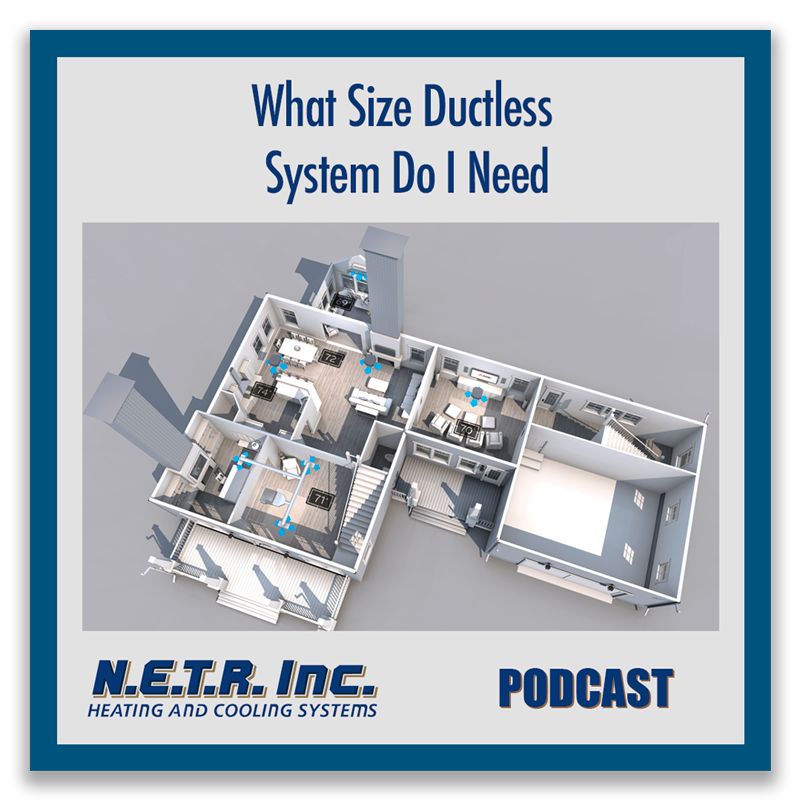 It is incredibly important to make sure you are choosing the right size when picking out a ductless system. But how do you know which size is right? We’ve got you covered! Listen as Mike Cappuccio goes in depth on how to determine what size ductless system is right for you and your family.

Mike: Good morning John, how are you?

What determines the size of a ductless system for a house?

John: Good. Mike, what determines the size of a ductless system that I need for a house.

A lot of times people would size it, they go out and just look at a house and go, “It’s 40 BTU’s a square foot for the home, that’s what you need.”

With some of these new spray foams and new building techniques that they’re using, I’ve seen homes as low as seven BTU’s a square foot. We’ve got to really know what’s in your house to determine the size of the system we’re going to put into your home.

John: You can’t just go back to square feet and just say, “Oh, that’s it.”

John: It probably matters whether or not the house is facing south or north, what size windows you have, and things like that.

Mike: Size windows you have, sliders, skylights, things like that. When people start putting in these skylights in their homes and big sliding windows, windows facing an easterly exposure when the sun’s coming up in the morning and all windows may be looking at the water or something like that, those rooms become ovens.

What happens if I select too large of a ductless system?

John: You’re doing these Manual J load calculations, of course, and you’re trying to determine what size system to put in a home. What happens if somebody puts in too small or too large of a ductless system in their house?

Mike: Believe it or not, people think, “Oh, the bigger the better. I’ll just buy more air conditioning that’s going to work great. It’ll make the room so much colder, I can just buy a bigger system.” That can be a domino effect and what I mean by that is you buy a big system and you have a 20×20 room and you put in X amount of air conditioning that’s over-sized. Yes, it cools the room down, it brings the temperature right down but then what happens is it doesn’t remove any of the humidity from the room. What it does is it brings the temperature down in two minutes, three minutes the rooms nice and cold, it’s right where it needs to be, but then all of a sudden, now the air conditioning is not running so the humidity is 80% in the room. Now you can start to have moisture, you could have mold problems, things like that can start to happen, it’s not good when that happens.

John: You actually want your air conditioner to be running most of the time so that it’s constantly pulling the moisture out of the air.

Mike: You want the air conditioning to be running, so it’s removing the moisture out of the space too, it’s pulling the temperature down and removing the humidity is what it’s doing at the same time.

John: Is that a big risk in terms of DIY ductless projects when somebody’s trying to put a system into their house by themselves, are they making a mistake in what size of a system to put in because they’re probably not doing those J load calculations on their side.

Mike: No, they wouldn’t even know how to do that. These are some of the things that we do, that’s why you hire a professional to get the right size system put in your home. Again, there’s a lot of these online calculators that just say, “Hey, you got a 10×10 room this is what size air conditioning system you need.” They’re not asking you does your house face east? Does it face west? Do you have windows? Do you have insulation?

How does NETR make sure that each home received the proper size system?

John: How does NETR ensure that each home receives the proper size system and obviously you’ve talked about the J load calculations? Is there anything else that goes into it?

Mike: You’ve really got to go out to the home. We sit down with the homeowner when we go out there and we have what’s called an ‘in-home comfort survey’ and we’re going to ask you a lot of questions. How do you live? How many people live in your home? Do you have pets? Does anybody have asthma? Does anyone have breathing problems? What’s going on in your home? Everyone has a different lifestyle and everyone uses their home differently. Some people don’t like 72 degrees, some people like 78 degrees.

What type of insulation is in your home? A lot of times you’re seeing people do insulation upgrades as they’re doing air conditioning too and then they forget to tell us, “Oh, by the way, we’re insulating the whole entire home with cellulose or open cell insulation” and then all of a sudden we’ve over-sized the system at that point. We really got to know how you live and what do you plan on doing, are there window upgrades? What are you doing here? Then once we do that, then we can put it into the right software, look at what’s there, determine what size you need for your home and then put in there. Like I said before, a lot of times I think a home needs this and when I come back and I plug it in the computer it doesn’t need that.

John: Yes, that’s really interesting. Like you said, the average person probably thinks, “Just get it cooled off as quickly and easily as possible and that’s all I need to worry about.”

Mike: “To buy the biggest turbo charged air conditioning system I need to cool this room off”, and it’s, “I’m always going to be freezing here.” Yes, you’ll be freezing but I don’t know if you’ve ever felt it but you can have a 72-degree room with 80% humidity, it’s like it’s raining. A cold rainy day is what that feels like in that space and it is not comfortable.

Mike: The other things you really got to look at too is the building envelope of the home. How has it been sealed, are you in a basement, is there moisture problems in the basement, is there humidity problems already in that basement? A lot of times we go into a home too, we condition the game room or the basement or something like that, someone have turned the basement into a game room or a TV room, a family room or something like that and they want to put air conditioning down there. Yet they really don’t need air conditioning sometimes in a space like that because they’re below grade.

They really need a dehumidification system because if you get the humidity out of a damp basement and it’s cool. You’d be amazed at how cool it is and dry it is and it works very well but again those are some of the things we need to look at when we come out to the home to see those things. That’s why someone calls up here to the office they’re like, “I just want a price, give me a price to put it into my home. I just want a ballpark price.”

I don’t even know what’s in your home? I don’t know how you live? How can I possibly give you a price for something like that when I don’t know. We haven’t even had a discussion on how you live or what you do in your home. Those are some of the things you’re going to be really careful about when you go out and look at a home.

John: That’s really great advice, Mike. Thanks again for speaking with me today.