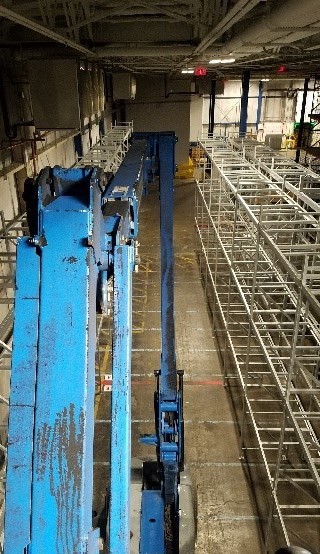 Ken’s Foods is best known as the creator of Ken’s Salad Dressings. When the company purchased a new location in Marlborough, MA, they immediately knew it was time to make some upgrades.

The old building that they had been using had no refrigeration system, which significantly shortened the shelf-life of their products and reduced their freshness. So, when the time came to move into the new building, which was old Barrett Warehouse Distribution Center, massive renovations were needed to accommodate their need for refrigeration.

In addition to the large walk-in cooler that was needed, Ken’s Foods decided to install an automated picking system that would reduce the need for manual labor inside the cooler and increase efficiency. This system was designed to allow conveyer belts to move through the walk-in cooler’s shelving units and robotically pick the goods to be placed on the trucks. The conveyor belts ran throughout the cooler and out onto the loading dock, where the products could be loaded onto the refrigerated trucks with ease.

N.E.T.R., Inc. needed to design a cooling system for the loading dock as well so that the products could remain refrigerated at all times. This presented a challenge for Mike Cappuccio, who was the project manager on this commercial refrigeration installation.

The Problem: Ken’s Foods needed a massive 450 ft by 80 ft walk-in cooler built in their new location — old Barrett Warehouse Distribution Center. N.E.T.R., Inc. had to overcome several challenges in designing a refrigeration system that would accommodate the automated picking machines installed in the cooler. They also had to design a cooling system for the loading dock to keep the products cool at all times.

The Solution: Mike Cappuccio and his team used a software called The Hub to help determine the sizing specifications for this job. Ultimately, nine 15 horse-power condenser units and two 60 horse-power condensers were installed, along with thirteen evaporator coils to cool the entire walk-in cooler and loading dock properly. 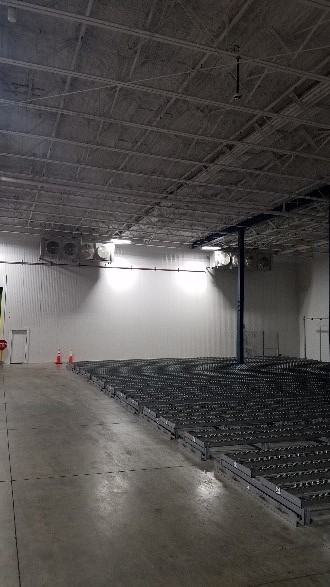 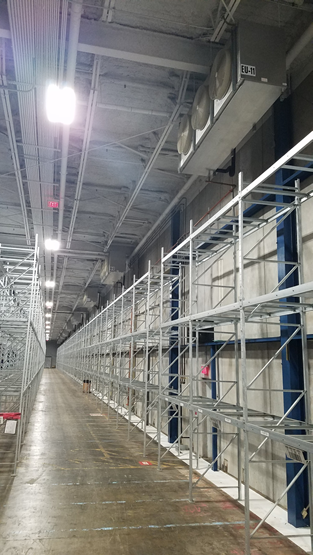 There are several factors that must be considered before the installation of a commercial refrigeration system can begin, including determining the refrigeration load for the project. In many cases, this calculation includes the size of the space to be refrigerated and the type of paneling to be installed. This particular project, however, had additional factors impacting the refrigeration load required. The machinery was a vital labor-saving innovation for Ken’s Foods, but it presented some hurdles for N.E.T.R., Inc. when designing the walk-in cooler.  All the cooling equipment must work around the machines, and the cooling system also needed to be able to offset the heat generated by the robotic system.

The cooler was going to be 450ft long by 80ft wide, which accounted for approximately 25% of the existing building — the rest of the building was being renovated to make room for offices and dry goods storage. Another challenge that Mike and his team faced was the 30ft ceiling above the space designated for the cooler, which would require expensive refrigeration paneling to properly insulate.

Ultimately, Mike used software called The Hub to help determine the exact size of the refrigeration system needed for this installation.  This program made it easy to plug in all the possible factors and produce a recommended size for the system. The Hub accounts for the height, length, and depth of the commercial refrigeration system, while also considering how many times staff enters and exits the cooler.  The more often a door is opened to a warm area outside the cooler, the more frequently the refrigeration unit must run, which impacts the size of unit required to keep up with the demand.  Another factor to consider is the amount of lighting in the freezer or cooler.  Even the small amounts of warmth given off by lighting can affect the temperature of the cooler and increase the refrigeration load.

In this case, N.E.T.R., Inc. had to consider the machinery for the automated picking system and the heat produced by its motors. The Hub was a convenient tool that helped Mike and his crew to design a system that would perfectly meet the needs of Ken’s Foods’ new location.

Initially, the 30 ft ceiling in the cooler was going to need refrigeration paneling, however, after the initial design, Ken’s Foods decided that the cost for including the entire 30ft space was outside their budget. They redesigned the project and chose to use spray foam on the existing bar joists and metal deck, which would provide insulation, but not as much as the original panel. Because of these changes, N.E.T.R., Inc. had to increase the refrigeration value for the cooler.

The same process was used in the loading dock to help cut the costs of installing more ceiling panels. Additionally, in the loading dock, the sprinkler system would have needed to be removed and reinstalled if new refrigerated ceiling panels were to be used  Because of the spray foam solution, Ken’s Foods was able to save the cost of having to move the sprinkler system. 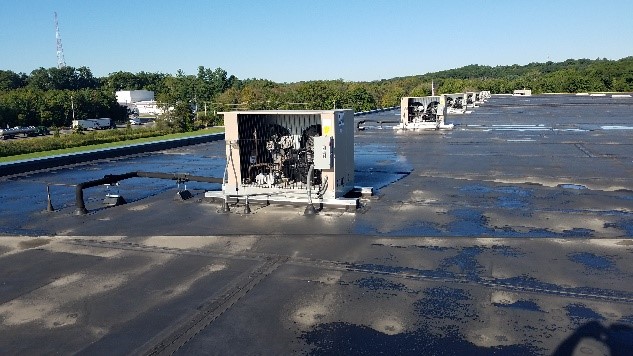 After the design phase was completed, and all the refrigeration load factors had been considered, it was time to begin the installation. 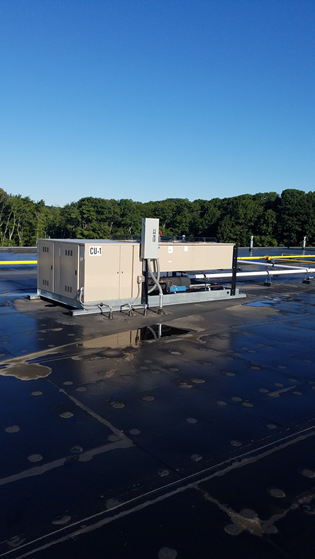 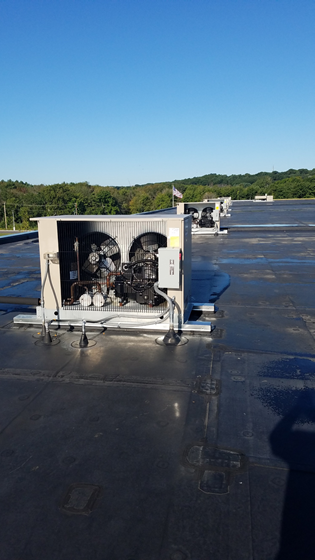 The large walk-in cooler received nine 15 horse-power Bohn condenser units, which were installed on the roof. A crane was needed to hoist the units to the rooftop, where they were secured. Ken’s Foods had a general contractor on-site during the renovations, who was able to ensure that the structure could withstand the additional weight. N.E.T.R., Inc. pulled a mechanical permit for their portion of the job, but the contractor was able to determine what extra work was needed to ensure the roof could hold the condenser units for this large-scale commercial refrigeration installation.

Each 15 horse-power condenser weighs approximately 1,200 lbs. and the 60 horse-power units, used in the loading dock, weighed around 3,000 lbs. Because of the additional weight, steel was welded under the roofing deck to support the weight from the refrigeration equipment.

Ken’s Foods also had an electrician on-site for the renovations to their new location. The electrician was responsible for the electrical wiring of the condensers and the evaporators, which N.E.T.R., Inc. then took over to wire the controls to the monitor in the electrical room. 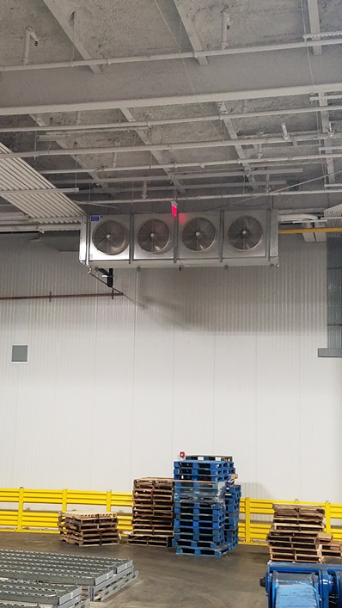 From start to finish, the Ken’s Foods commercial refrigeration installation took approximately two and a half months to complete.  Additional time was needed to install the robotic, automated picking system, but Ken’s Foods is now moved into their new location.

Since this project was completed, everything at Ken’s Foods has been working well, and the company is thrilled to finally have a refrigeration system that keeps all their products cold from storage through loading and all the way to the customer! For the first time in twenty years, this new location provides the company with the opportunity to deliver a product with a longer shelf life that remains fresher through the entire process thanks to N.E.T.R., Inc.’s commercial refrigeration installation.

In Need of Commercial Refrigeration?

If you have a business that needs an updated refrigeration system, walk-in cooler, freezer/cooler combo, or other cooling systems, contact N.E.T.R., Inc. today.  We have decades of experience installing heating and cooling solutions for residential and commercial customers.

Whether you need a new ductless heating and cooling system or a cooler system for your business, we can help.  Find out more about previous installations we’ve handled for customers like you in the Massachusetts area.