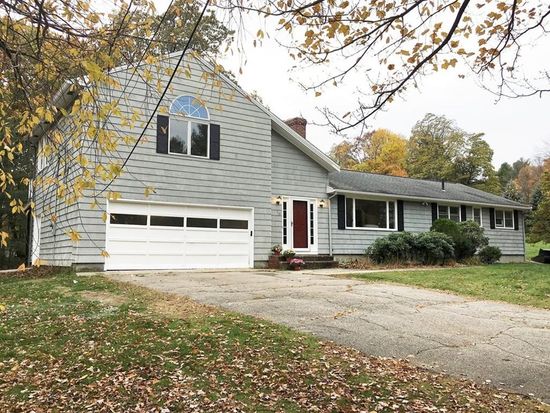 It’s common to see additions on ranch homes. These one-floor houses became popular during the suburban housing boom of the 50s and 60s. Over time, people began to add more rooms to them.

This ranch in Andover, MA, for instance, had a large room added over the garage. It gives the home a split ranch look. The room has high ceilings that just about make it like a second floor.

While this increases the value, it also makes it harder to heat and cool the home. Since it’s an addition, the room was never part of the original hvac design. It gets some heat, but not a lot.

However, it wasn’t the only trouble spot in the house. The den, where the family watched TV, had many of the same problems: Too cold in the winter, not cool enough in the summer.

So, our homeowners reached out to N.E.T.R., Inc. for a way to fix these problems. They wanted to supplement their system and add air conditioning for the first time. While they knew it would be a big investment, they wanted to get the most for their money.

Fortunately, they called the right place. We designed a custom system using ductless technology for their den and the room over the garage.

Problem: Homeowners in a split ranch in Andover MA wanted better climate control in their den and the big room over their garage. They had oil heat but no air conditioning.

Solution: Installed an outdoor Mitsubishi Electric heat pump with matching ductless units in the den and room over the garage.

Uneven heating and cooling in a split ranch

Uneven heating and cooling is when there are hot and cold spots in different parts of the house. A central system like a gas furnace is supposed to provide an even temperature throughout the home. But, this doesn’t always happen. The result is different temperatures in various rooms.

It’s a widespread phenomenon, especially in split ranch homes. It’s partially because of how the home is laid out. One part of the house has two stories while another has one. As a result, air travels differently than in regular two-story houses.

Here’s what’s happening in this case: The room above the garage is essentially the second story. And, hot air rises. So, as the heat moves up, it collects in the highest point of the home.

Meanwhile, the garage floor is concrete. And, it’s not well insulated. That makes it one of the coolest parts of the home. And, warmth naturally gravitates toward cold air.

So, it’s more than the hot air collecting on the floor above the garage. The garage itself is also attracting heat, which is collecting above it. And, since the den is next to that room, it’s also getting more warmth.

This would be a good thing, except that it collects at the wrong times. In the summer, there’s also sunlight and heat beating down on the roof. Now, that heat gathers in the room above the garage. It’s got no place to go.

As a result, the room above the garage, and the den next to it get really hot in the summer. In the winter, however, the opposite occurs.

This house has oil heat, which warms a home quicker than gas or electric. So, there’s plenty of heat in the house. However, there’s a lot of cold air outside. Now, when the hot air rises it keeps going up. Since there is cold air outside, the warmth escapes through the roof.

These factors make hvac in a house like this challenging. Fortunately, new technology makes it easier to address. 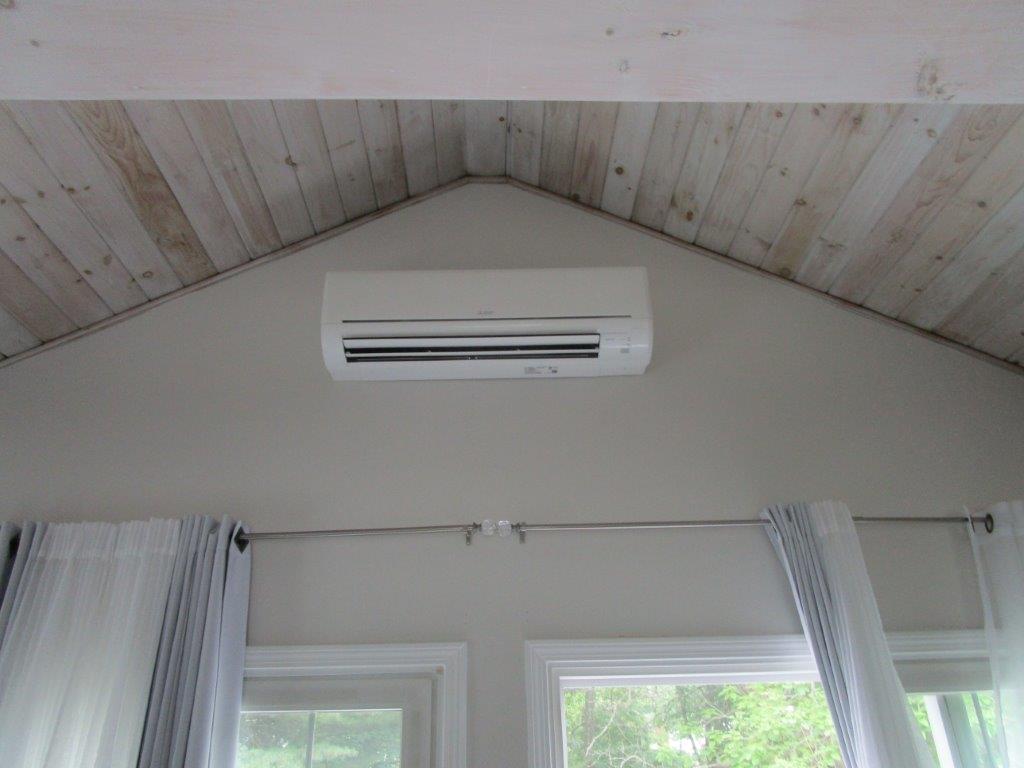 Ductless units offer what’s called “zoned” heating and cooling. That’s because each unit has its own thermostat. And, the system overall is much more flexible than older central hvac solutions.

Instead of traditional ductwork and vents, warmth or cooled air travels through thin plastic tubes. The system starts outside with a heat pump. Then, those tubes are small enough to fit inside walls. Our installers can snake them through the house without having to tear down walls, take up extra space or build expensive ductwork.

At the other end are the units themselves. Our installers find the best spot in each room for them. Since the tubing moves around so easily, we can put the units anywhere we want.

Each unit has enough power to heat or cool a room or two. And, each one has its own thermostat. This where the “zoned” part comes in.

Now, every unit handles one zone. That allows the system to add extra heat or cold air where it’s needed. This way, the entire home is heated or cooled evenly.

In the case of this home, we installed just two units: One in the room above the garage and one in the den. In the winter, they add just a little more warmth when the oil furnace isn’t cutting it there.

And, for the first time, there is air conditioning in these rooms. The units go a long way toward keeping these rooms — the hottest in the house — colder in the summer.

Ductless units save you money on energy bills. 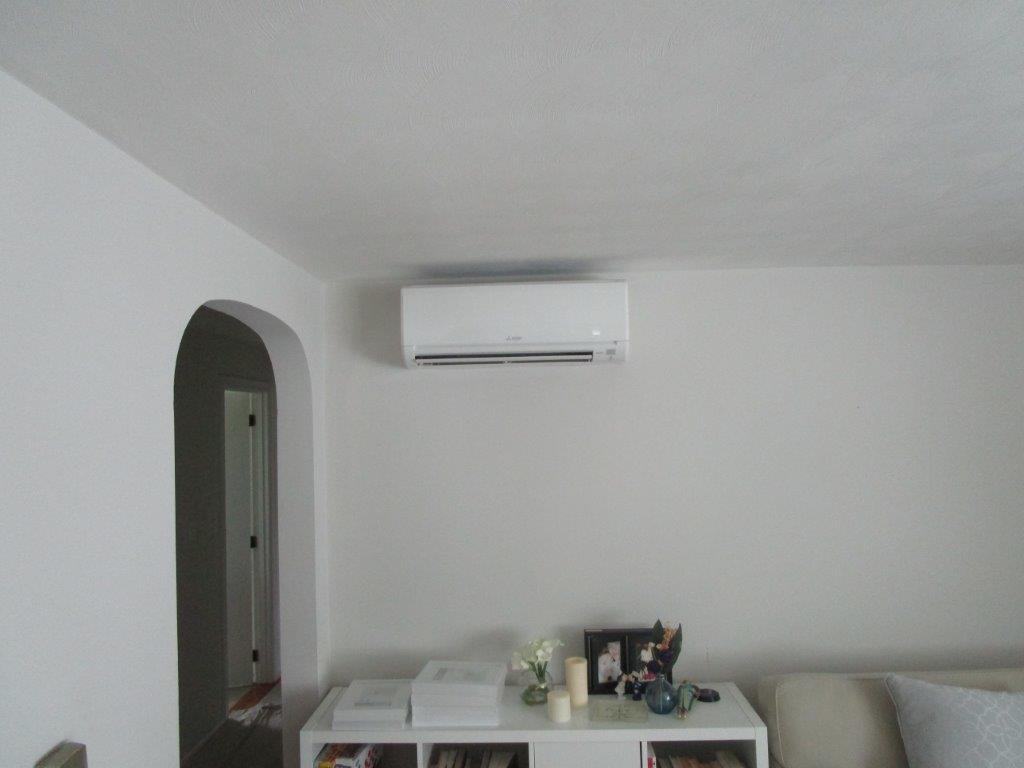 It would seem like adding ductless HVAC untis to this split ranch would make the house’s energy bills go up. After all, the homeowners would have to pay for the extra energy it uses. But, that’s not exactly what happens.For some months, the house will actually use less energy than before. And, the homeowners were eligible for large cash rebates that put a sizable dent in the cost of the new system.

The units are Energy Star-certified. That shows that they use less energy than similar hvac systems to provide the same results. Today, many groups across the country want people to install new energy-efficient models. They’re better for the environment. And, these groups make them better for people’s wallets.

In this case, our homeowners were eligible for more than $2,500 in cash rebates for going ductless instead of using less efficient options. Thanks to the Massachusetts Clean Energy Center and Mass Save, they are paying much less than the listed price for their new system.

And, now, that more efficient heat kicks in, so the oil doesn’t have to. In the fall and spring, the HVAC units alone can provide enough heat for those cold rooms.

As a result, the oil heat, which is more expensive, doesn’t turn on as early in the season. And, it doesn’t have to work as long as it used to in the spring. By using the more efficient system, our homeowners save money on their energy bills.