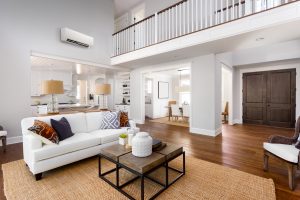 Mike Cappuccio: Good morning, John. How are you?

John: Good, thanks. So, Mike, why are air conditioners typically mounted in windows, historically?

Mike:  Well, John, that’s been the option for many, many years now, where people just go out and they go to the big box store or the local hardware store and they buy a window unit and they come home, they open up the window and slide it in and put a couple screws in it and away they go.

John: So, it’s easy. You can do it yourself.

Mike:  Yeah, it’s a very easy, do-it-yourself, inexpensive thing. I mean, great when you’re young, because an air conditioner sometimes can weigh 100 pounds, some of your bigger units. You know, you get into these 24,000, 36,000 BTU window units. They’re huge and they’re very heavy and your smaller ones, typically . . . 50, 60 pounds, possibly. I do it for my own mother. My mother’s 89 years old and I have to go over to her apartment and do it. She can’t have a Mitsubishi unit, so unfortunately, I have to open the window and slide the thing in and do what I got to do in the window and put it in place. So, it’s been the option that’s been there for years.

It’s a cheap and inexpensive way to condition a space and it removes the heat from there. And they’re very loud. You know, you’re sitting there trying to watch TV. You got to remember, the compressor’s in there. The coils are in there. Everything’s in there and it’s a very loud system.

John: Right, and air conditioners in general have to be put in windows or have some sort of ventilation to the outside, because part of what they’re doing in order to cool the room is to take the hot air from the room and to blow that outside.

Mike:  Yeah, a lot of people think we’re putting cold air into a space when we’re air conditioning a space, but we’re not. We’re removing the heat from it. We’re taking that warm air, running it across a cold coil, and then putting it in there, and that warm air is being dispersed outside. I mean, I don’t know if you’ve ever walked in front of your car in the summertime or actually felt an air conditioner outside of a home from a central air conditioning side, or even a window unit like we’re talking about. When you feel the back of the air coming out, that’s very hot. It’s usually around 100 to 120 degrees, so that’s the warm air coming out of the room, being displaced outside.

Downsides to a Wall-Mounted or Window Air Conditioner

John: Okay. What options are available if I’d prefer to mount an AC unit on the wall, instead of a window? I know the first apartment that I ever had had a big hole cut into the wall with a panel and you could remove the panel during the summer and stick an air conditioner right in the wall, so at least you didn’t have to use up the window space, but that seemed a little funny to have this big hole in the wall.

John: I can’t imagine that would be very good in the winter. You’d have a lot of drafts coming in.

Mike:  It’s a lot of cold air coming in through it, and we find, too, a lot of times, critters start to get in there. They start building nests in there. Now you’ve got to remember you’ve got to get up there. You got to start cleaning it from the other side, doing what you got to do, and what we find, too, a lot of times, the window unit that’s been put in the wall for many years like that, the frame starts to rot. They start to get carpenter ants inside of the framing on there. Maybe the air conditioning unit hasn’t been serviced for a long time and the drains get blocked up in there and the water is actually leaking down inside the walls and it’s built up all kinds of mold inside the wall over the years and stuff.

I’ve seen a lot of bad things happen when people mount big air conditioners inside of walls, and the wall can actually vibrate. It starts cracking the plaster and a lot of things come out of that that aren’t . . .  it’s a good short-term, cheap fix to do what you’re trying to do, but again, it has a compressor in it and it’s vibrating. It’s loud. It’s not the most ideal situation.

John: Yeah, you have a lot of the same issues that you have with the window units, but maybe even more, because now you’ve opened up a part of your wall.

John: Right, right. So, talk a little bit about ductless heating and cooling and why you recommend that as the best type of wall-mounted air conditioner.

Mike:  Yeah, going back to the wall-mount units, I cannot tell you how many wall-mount air conditioning units we end up putting a ductless unit above the top of it, because people are just like, “I’m so sick and tired of listening to this thing run. It’s loud. It’s ruining my walls. We want to remove that.”

We do have a carpenter on staff when we do take the unit out of the wall. We take it out. We patch up the hole. We put drywall in there, insulate it, frame it, put the plaster on it inside, sand it down. We usually leave the painting up to the homeowner on the walls, but we remove that and we put a ductless unit in from there. Now we’re making a three-inch hole through your home to the outside and we’re actually putting the compressor outside.

The condensing unit that has the compressor in it is going to be outside the home now, on a pad below or on a stand below there, and with the ductless unit, they’re all inverter-driven. The fans speed up and slow down. They’re very, very quiet outside. The unit inside is probably five to six times quieter than you’d ever hear, from a decibel standpoint, of what you’ve had there. Now you can listen to your television. If it’s in your bedroom, you can sleep at night, and again, that big hole goes out of your wall and away we go, and everyone’s comfortable at that point. Much better situation for what you can do today. There’s much easier ways and cleaner and neater ways to do things. That air conditioning unit in the wall is from 20 years ago.

Ductless is Safer than Window Units

John: Right, so the big things are that it’s just so much quieter than a window-mounted air conditioner. Talk about safety, too. You mentioned to me, when we were talking before, about issues with … You have this window that’s open, and especially if you have that on a first-floor type of house, you’ve got a window-mounted air conditioner and that could open up issues for security with your home.

John: And then just climb in the window.

Mike:  It’s at eye level. Just push the window unit into the house and open up the window and come in, and that’s how a lot of homes do get broken into in the summertime, from the window unit. They’re really only held into the window by two little tiny screws on the sides with plastic. They’re so simple to just push into the home and just bang, climb inside. So, I mean, safety is a big thing with window units. You got to really look at that.

And the other thing, too, I want to mention about window units, too, is I can’t tell you how many times I go to a house to look at installing a in the house and they’ve got a window unit there and it’s all bent up and it looks like it fell out of the window. And it’s exactly what happened. The wife will say to me or the husband will say to me, “You know, I tried to put the window unit in the window.”

John: Yeah, and it went through.

Mike:  “And I couldn’t hold it. It just fell and it fell down two stories and this is why I’m calling you now, because I’m just tired of doing this. I’ve ruined three air conditioners like this. They fell out of the window and they were all destroyed.”

I’m going to tell you, I’ll be the first to tell you: It happened to me when I was young, in my 30s, and I was putting one in my own house and it ended up falling into the bushes below. And I think anyone that will tell you that they haven’t done that maybe is a liar, because they do fall out of the window when you’re trying to put them in sometimes, because it’s a heavy piece of equipment that you’re trying to install in a window with two little screws.

Ductless Can Lower Your Energy Bill

John: Right. And then the final aspect of the ductless heating and cooling system, of course, is the cost, just that those window air conditioners, boy, your electric bill in the summer is going to go sky high.

Mike:  Yeah, it’s an on and off compressor. It comes on. It goes off. It comes on. It goes off. And you know, when you get the bigger window units and you’re sitting at the kitchen table and you see the lights dimming in the house, that’s the current that’s being taken out of that on startup. And they start up and shut off a lot, and that’s where all that’s happening.

With our systems, we don’t turn on and turn off on a regular basis. We speed up and slow down. We start at a very soft current and we kind of ramp up. The compressor speeds up and slows down. It doesn’t go on and off all day long, and the comfort is 100 times better than a window unit.

John: All right, that’s really great information, Mike. Thanks again for speaking with me today.

Mike:  Thanks, John. Have a good day.